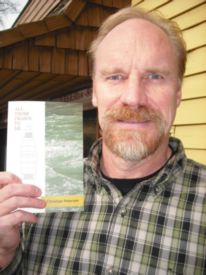 
Christian Petersen grew up in Quesnel, BC. He has lived in the Cariboo region most of his life, and currently resides in Williams Lake. He holds degrees from the University of Victoria, and the University of New Brunswick.

Let the Day Perish [see below] is collection of 12 short stories set in the Cariboo.

In his novel Outside the Line, "Peter Ellis is a rookie probation officer who has just gotten saddled with a file that goes sideways. He's not in the best headspace to start with, since his marriage broke down the previous winter. Now it's the beginning of summer, the rodeo's coming to town, and the one solid thing left in his life, his job, suddenly bucks him hard. Former NHL player Todd Nolin is Peter's new "client";. The victim is Todd's wife, Marina Faro, who has been badly beaten and feels her estranged husband is bent on killing her. Peter grapples with his need to ensure Marina's safety while keeping a rein on his own attraction to her. There's no doubt that the local hockey hero is dangerous, but Marina's something of a puzzle herself. All Peter knows is he's drifting outside the line, and what lies beyond may be death." -- Dundurn Publishing

EMPLOYMENT OTHER THAN WRITING: Probation Officer

OUTSIDE THE LINE, Dundurn 2009


Christian Petersen fixes his unflinching gaze on the rough beauty of Cariboo/Chilcotin country, capturing in his sights a creature dangerously near extinction-the 21st century cowboy.

Perfectly reigning in the confusion and the displacement of a diminishing band of men living on horseback, hunting the wild mountains and facing the spectre of unforgiving nature, he has created a modern outcast.

Here are men enslaved to the grind of the pulp mill; holed up in dented trailers or wild behind the wheel of trucks speeding down dirt roads to the Fraser; hunkered on bar stools or high in the saddle of a John Deere. Here are fathers, brothers and lovers in search of lost children, unrequited loves and the memories long faded in the wash of fast-running streams and firelight. Here, too, are the unpardoned, raging against what they might have been, what they are and where their pasts have led them. Yet Petersen's characters hollow out a quiet dignity, gentle in the knowledge that they are small in the face of pain, of violence, of jealousy-and of change.


With some fanfare it should be announced that Christian Petersen's collection Let The Day Perish, whose title doesn't quite fit the book's content, is a first book that means we've got a fine author on our horizon. Mostly his fictions are set in up-country locales that Petersen has digested through deep experience and perhaps through chewing it over with mentors Jack Hodgins and Steven Heighton. It was for me one of the best evening's reads that came out of my box of books.


"The pistol is nickel-plated Smith & Wesson, with an ivory grip. Stuart loads five chambers, leaves the hammer on the empty one as its owner, his grandfather, had instructed. He catches his own reflection in the mirror. His eyes are wild; his silver mustache wet with tears."; Set in the Cariboo and Chilcotin, Let the Day Perish (Porcepic $ 16.95) is Christian Petersen's first collection about an endangered species-the 21st Century cowboy. Petersen lives in Williams Lake. 0-88878-400-7