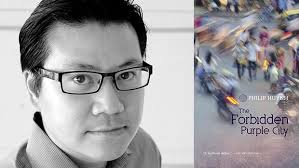 
Now a lawyer in Richmond, Philip Huynh offers some superb, opening stories about the Vietnamese diaspora in Canada, mainly set in Vancouver, in his debut collection, The Forbidden Purple City (Goose Lane $22.95). The title story concerns the walled palace of Vietnam's Nguyen (pronounced NWEE-en) dynasty in the former capital of Hue, in central Vietnam, not to be confused with its counterpart in Beijing. The dynasty had thirteen emperors until its final emperor abdicated in 1945, but an emphasis on that story is a tad misleading. The most compelling tales are deft renderings of the modern lives of first-generation Canadians trying to balance awareness of their parents? values and attitudes with their need to forge their own identities. Stories are also set in Winnipeg, New York and Korea. Definitely a ?writer-to-watch,? the Vancouver-born Huynh has deservedly won several prizes for his stories. His parents fled Vietnam during the civil war. 9781773100784

Philip Huynh?s stunning collection of nine stories is bigger than it looks. There?s a lot to relish and think about in these stories by a second-generation Canadian whose parents fled Vietnam during its civil war.
Now a lawyer in Richmond, Huynh easily sets his stories in New York, Vancouver, Winnipeg, Jeju Island in Korea, and Hue and Hoi An in Vietnam.
In an unforgettable story that flirts with magic realism, The Abalone Diver, a young Vietnamese bride?who was forced by poverty to leave her country and marry a stranger?tries to find a sense of community on an isolated Korean island by befriending, and eventually joining, a bizarre coterie of crones who dive for abalone and double as a tourist attraction.

In the title story, The Forbidden Purple City, a man who escaped his homeland in 1980 recalls the glories of Hue, the old imperial capital that was leveled in 1947. Vietnam?s Nguyen (NWEE-en) dynasty in central Vietnam had its own ?forbidden city? that housed thirteen emperors until its final emperor abdicated in 1945. The walled palace was desecrated by the Communists after their arrival in 1968.

The story?s narrator was employed as historical consultant with the impossible task of reviving the splendor. The remains of fifty buildings consisted of some floor tiles, a stairway and a pair of brass cannons. There were no historical photos for reference but the pretense of refurbishment kept him employed and fed. In his old age he recalls he had no adequate tools or supplies to undertake proper renovations. Ruefully he must accept that the wonders of The Forbidden City can only survive in his imagination.
In Toad Poem, Diem, now 64, is similarly returning to Hoi An after 45 years to honour his parents with a Toad Poem, based on a well-known Vietnamese folk tale. His poem must rouse the heavens and memorialize his parents. In a new suit bought with his meager life?s savings, he travels to his parent?s village as a pilgrim to the past.

Such exotic tales of displacement and regret, however, are not typical; and one can argue the title of the volume is somewhat misleading in terms of its content. Equally compelling?and more numerous?are Huynh?s deft portrayals of younger Vietnamese Canadians as they try to balance awareness of their parents? values and attitudes with their need to forge their own identities.

In Mayfly, narrated in the second person, readers meet a Caucasian boy who gradually becomes embroiled in a Vietnamese gang in Vancouver. It?s a fascinating and ultimately chilling tale about the perils of gradually belonging to those who don?t belong. The mayfly in nature only lives for 24 hours. The nameless boy flourishes, flirts with the hierarchy of the gang, and falls afoul of violence with an inevitability that feels almost macabre as he meets his mundane end.

The first story, The Investment on Dumfries Street, is a perfect example of Huynh?s technique of rendering filmic vignettes. Gradually the young protagonist discovers the truth about his father?s shady investments. The disappointing truth is completely convincing: shoddy grow-ops in the basements of unoccupied houses.

The tensions and complexities of living with a foot in each world, and two generations sometimes uneasily co-existing, are masterfully crafted and entirely convincing. In Gulliver?s Wife, a man discovers that his large copper statue of General Tran Hung ?ao, a once-revered relic that he saved from the Communists and brought with him to Canada, is now no longer wanted by anyone.

Short stories are a challenge to write but in Huynh?s hands they seem to flow seamlessly off the page, leaving an afterglow behind. None of these stories have cut-and-dried endings?they are simply frozen, waiting for the reader?s verdict.

Huynh easily handles various points of view as he describes relationships that range from father and son, mother and son, husband and wife, friends and sweethearts, strangers, and even between the living and the dead. The stories set in North American span from 9/11 to the present.

There are memorable descriptions on nearly every page: ?The French kindergarten teacher is writing on the chalkboard: le chat, le chien, au pays, and other short words arranged like little bonbons on a plate.? Or from The Tale of Jude the description of a strand of ivy on a building as ?a single vine of ivy like a raised vein.? Nine words but suddenly you see it so clearly and get what it implies.

Most of these stories have been published in Canadian literary journals, as well as in two editions of the Journey Prize anthology. Collectively, this is a brilliant debut.

These are not stories primarily about prejudice or about victims. They are quite simply and exclusively tales of human nature, and therefore one never knows what will happen next. Chekhov and Alice Munro would thoroughly approve. 9781773100784