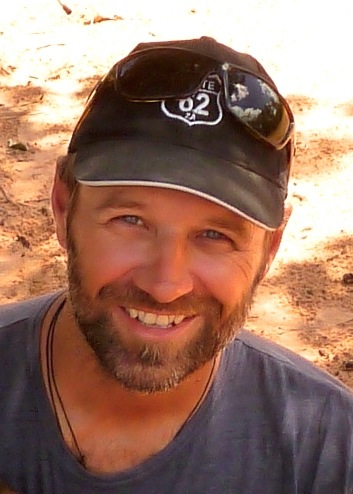 
Recently Brian Poletz rode the entire length of Laos on a bicycle. Back in 2004 he cycled the entire spine of the Canadian Rockies via the Bow Valley Parkway. In 1991 he trekked through the Himalayas with no guides, no Sherpas, nearing the peak of Kangchenjunga. In 2000, he hung out with the remote Kogi tribe of Northern Colombia; having visited the more inaccessible Mentawi of Siberut Island in Indonesia in 1992. Those are just a few of his adventures.

In his first memoir, The Spaces in Between - Stories of Discovery (Nomadic Poletz Publishing 2015), Brian Poletz recounts globetrotting and globe-cycling experiences, as well as his childhood in rural Saskatchewan. Poletz was born in Biggar, Saskatchewan, in 1968, the year of the monkey, when the temperature was -38 Celcius. Since then he has visited six continents and has travelled through more than 50 mostly warmer countries.

Compassionate and philosophical, Poletz is not a self-fixated journalist glorifying his adventures; instead he is consistently concerned with describing the lives and characters he meets--whether he's visiting a dangerous paradise in Colombia or evading the amorous intentions of a beautiful and muscular olive farmer in Crete named Gaia or realizing the extent to which immigrants are stifled in Switzerland. His final story about being duped in Istanbul even expresses sympathy for the team of extortionists who lured him into a nightclub.

Poletz has lived in Switzerland, France, and Spain, and holds a degree in environmental science and a diploma in engineering and construction management. When not travelling the world, Poletz resides in Victoria. He is from Biggar, Saskatchewan, located 90 km. east of Saskatoon.