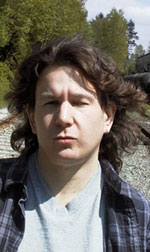 
Born in North Vancouver on January 27, 1962, Greg Potter is a former Vancouver Sun pop culture writer who played guitar with the Los Durangos and was a road manager for the Rus Tolman Band. His study of five decades of Canadian pop music, Hand Me Down World, suggests that most internationally famous Canadian music acts have sacrificed their Canadian identity in order to succeed. "Canadian music now is probably worse now that it's ever been," he said in 1999. He had special scorn for the Vancouver rock group Prism. He later teamed with Vancouver music legend Red Robinson for a survey of entertainers who visited Vancouver in the 20th century, Backstage Vancouver. Potter plays guitar for the folk-rockers Downland.

EMPLOYMENT OTHER THAN WRITING: journalist; musician

Hand Me Down World: The Canadian Pop-Rocks Paradox by Greg Potter (Macmillan, 1999)