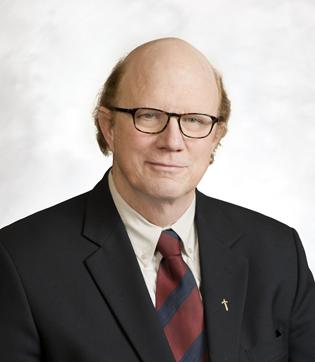 
An ordained Deacon of the Anglican Church, with a Master of Divinity degree from the Vancouver School of Theology, Pitman Potter might not look like a guy who plays guitar in a Grateful Dead cover band named Dustcover.

And as a guy who spends much of his time as a UBC law professor negotiating multi-million international business contracts in Mandarin, it's not likely he would be picked from a line-up as a guy who has also spent much of the past forty years travelling with other Deadheads to Grateful Dead concerts.

But ever since Potter first saw and heard the Grateful Dead in Washington D.C. back in 1969, as a student at St. Albans, he has been inextricably drawn the music of Jerry Garcia & Co, to such an enduring extent that he has now published a 100-page book that examines Christian underpinnings in the music of the Grateful Dead.

The Gospel and the Grateful Dead (Xlibris 2014) analyzes the music group's commitment to community, their musicality and lyricism, and their manifestation of grace in relation to the Christian Gospel in the realms of community, praise, and service.

For Potter, the improvised nature of the Grateful Dead's music has emphasized community access and Divine encounter. "Their song lyrics conveyed messages about solidarity with the world and reconciliation with the Divine," he claims. "And the life and work of Jerry Garcia exemplified the call of self-sacrifice for communities and friends, which, in Garcia's case, extended to sacrifice unto death."

The book started as a seminar paper while Potter was at Vancouver School of Theology taking his Master of Divinity degree. Completion was delayed due to health reasons and because he had a number of other academic publishing projects in the works, including two books that have since appeared as Assessing Treaty Performance in China (UBC Press, 2014) and China's Legal System (Polity 2013). Prior to self-publishing The Gospel and the Grateful Dead, Potter arranged for critical manuscript reviews to be done by people extensive knowledge of the Grateful Dead and the Gospel. All author proceeds from sales of the book will benefit a music program for needy children.

Potter is perhaps better-known as a Professor of Law at the University of British Columbia Law Faculty, HSBC Chair in Asian Research at UBC's Institute of Asian Research and a senior fellow with the Asia Pacific Foundation of Canada, but beyond being a high-status lawyer who greases the wheels of industry for deals with China, Potter has long been in touch with the divine.

As director of the Institute of Asian Research at the University of British Columbia, Porter organized a symposium on peace and reconciliation with the Dalai Lama from April 17 to 20, 2004, at the Chan Centre for the Performing Arts Vancouver with co-ordinator Victor Chan. When the Dalai Lama returned to Canada after a ten-year absence, he was accompanied on stage by two other Nobel laureates, Desmond Tutu, a longtime friend of the Dalai Lama, and Shirin Ebadi. Canadian Anglican Bishop Michael Ingham moderated a discussion that closed the conference. With Victor Chan, Pitman B. Potter has also co-founded a Tibetan studies program.

According to publicity info, Potter's teaching and research are focused on the People's Republic of China (PRC) and Taiwanese law and policy in the areas of foreign trade and investment, dispute resolution, intellectual property, contracts, business regulation, and human rights. Fluent in Mandarin Chinese (reading, spoken and written), Pitman practises in the area of Chinese business law. He specializes in contract preparation for joint ventures in the areas of power generation, manufacturing, leasing and finance, and technology transfer.

From Leninist discipline to socialist legalism: Peng Zhen on law and political authority in the PRC. Stanford University Press, 2003