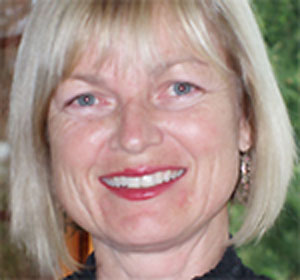 
Born in Bistroff par Grotsenquin, France, Liza Potvin has lived in Denmark, Korea, India, Japan and Southeast Asia. With a Ph.D from McMaster University in 1991, she has taught at Malaspina University-College in Nanaimo. Her first book White Lies (for my mother) is an autobiography about incest and the victim's longing for her mother's help. Directly based on 15 years of journal entries, it indirectly reflects that Potvin was sexually abused by her father and grandfather. White Lies won the Edna Staebler Award in Creative Non-Fiction.

Traveller's Hat (Raincoast, 2003) is a series of non-fiction short stories set in Brussels, Malaysia and Tibet, centred around the trickster figure Hermes. Her third title, Cougarman Percy Dewar (Trafford, 2006) profiles the life of Percy Dewar, grandson of the Scottish distiller Dewar, who was born in Extension, B.C. on Vancouver Island in 1920. He became one on the island's best-known cougar hunters but later turned to conservation efforts, living as a recluse in a log house in the Strathcona area and financing his own seven-year study of cougars, tagging them in order to follow their movements. Dewar's study was a factor in the termination of the traditional bounty that was available for cougar hunters. In his 80s, Dewar moved to Salt Spring Island where he took up residencey with his 80-something companion Ilse and successfully protested against a government proposal to reinstate bounties on cougars and wolves.

Articles: 1 Article for this author
The Traveller’s Hat (Raincoast $21.95)
Info


These stories explore the mythological trickster Hermes. This shape-shifter creates obstacles and mischief for characters on their way to Brussels, Malaysia, Alaska and Tibet. Potvin teaches at Malaspina College and has lived in Denmark, Korea, India and Japan. 1-55192-594-X