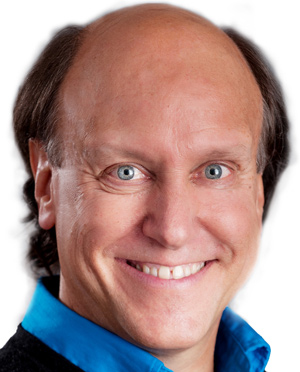 
The importance of digestion was learned by Van Clayton Powel the hard way--by being unable to eat most foods. His research into his stomach and intestines has led to You Are NOT What You Eat: Better Digestive Health In 7 Simple Steps (Mind Body Fitness / Sandhill $19.95).

"There's a 25-foot hollow tube inside you," he says, "that has its own brain and contains almost 70% of your immune system. And if it's not working properly, you're in serious trouble."

Powel is a former nursing supervisor, the founder of Mind Body Fitness Inc., and the creator of the Runner's Yoga Program. As a Registered Psychiatric Nurse he graduated top of his class and went on to specialize in detoxification, addictions treatment, and emergency assessments.

Powel also spent years in Asia training in ancient medical systems, martial arts and yoga, and has taught his unique blend of Western and Eastern techniques to thousands of clients, including Olympic athletes, the Canadian National Snowboard Team, and major corporations. Powel's teaching about digestion comes from winning his own battle with chronic digestive problems, and he happily reports he can eat anything he wants again. He and his wife spend most of their time on the west coast of Canada.

Explaining that odd surname, he says, "My Dad's last name was Postlethwaite but he came to hate it during the Second World War when his Navy mates took to calling him 'Pisslewait'. So after the war (and before any of his four sons were born), he changed it to Powel - using letters from his original surname. My grandfather was furious because my dad was the eldest son, and he never forgave my father. But decades later we learned there was another reason for my grandfather's anger. Turns out my grandfather was the illegitimate and never-acknowledged child of a British aristocrat whose last name was ... Powel. (My father had learned this during his time in the UK during the war and for some unknown reason hadn't recognized what an insult it would be to my grandfather to take this name.) So I'm a Powel with one 'L' - something that is always getting 'corrected' to Powell, once even by the passport office."

You Are NOT What You Eat Better Digestive Health In 7 Simple Steps (Mind Body Fitness Books $19.95)

Articles: 1 Article for this author
You Are NOT What You Eat Better Digestive Health In 7 Simple Steps
Publisher's Promo (2013)


Although we're commonly told 'You are what you eat', we are, in fact, only what we digest. And according to research, many of us are not digesting very well. Bloating, gas, headaches, fatigue ... food sensitivities, arthritis, skin problems - a growing number of conditions are being linked to improper digestion. And up until now, our focus has been on changing what we eat.

In a fascinating blend of the latest medical science along with powerful ancient techniques, You Are NOT What You Eat offers a fresh approach - a clear roadmap for changing HOW we eat: 7 Simple Steps that can lead you to more energy, vibrant health, and the ability to eat anything you want again by enhancing one of your body's most vital functions - digestion.

Did you know:
â?˘ Eating between meals might shorten your life.
â?˘ There's a brain in your gut that could challenge the one in your head to a chess match.
â?˘ 8 glasses of water a day could be bad for your digestion.
â?˘ Almost 70% of your immune system is located in or near your digestive tract.