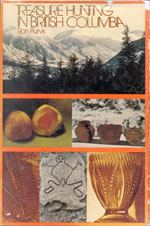 
St. George's School began as a boys' school in 1903, located three miles north of Lytton on a 200-acre tract bordering the Fraser River. In 1928, the New England Company, originally founded by Charles I in 1645 to promulgate Christianity in the New World, gave control of the building to the Federal Government with the stipulation that an ordained Anglican minister be placed in control. A new red brick building was erected closer to the river to accommodate 220 girls and boys. The chapel was dismantled and reassembled by Scottish stone masons. In 1945, there was a staff of 30 teachers, supervisors and attendants and the facility operated as an Indian Residential School. After five years in World War II, Ron Purvis, born in 1922 in Winnipeg, was hired as a supervisor by Reverend Canon Charles F. Hives, the Anglican principal. He married Hives' daughter Jean and stayed at the school for 14 years, becoming vice-principal. He wrote Treasure Hunting in British Columbia (McClelland and Stewart, 1971). His memoirs were published as T'Shama (Heritage House, 1994), a word that means 'white man, staff or authority'.