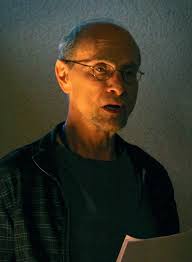 
A member of the influential Sixties/Seventies Vancouver art collective, Intermedia, Henry Rappaport has published five books of poetry: Heat in the Heart, A Book of Days, Are Words Things?, Dream Surgeon, and Loose to the World (Ronsdale 2014). The first four books were published by an arm of Intermedia called Intermedia Press, which Rappaport co-founded. A gap of forty years separated the first four books from his fifth.

His poems have appeared in Poet Lore, The Cincinatti Review, Poetry Northwest and other magazines.

He has lived in Vancouver since 1968, where he writes full time.

Heat in the Heart

A Book of Days


Henry Rappaport ran Intermedia Press from 1969 to 2003. After a 40-year hiatus, literary stalwart Henry Rappaport released his fifth book, Loose to the World (Ronsdale $15.95). We asked him to recall the heady days of his Intermedia imprint and printing company.

In the late 1960s and early 1970s, the Vancouver art, poetry and publishing scenes were very different from today. Many of them were consciously and intensely experimental and collaborative. Intermedia exemplified those trends. Established with the efforts of well-knownartists like Jack Shadbolt, Roy Kiyooka and others, Intermedia became the locus for work by younger visual, language and movement artists.

While many of the poets eschewed the label "concrete poetry,"; the preponderance of visual artists at Intermedia influenced a significant number of them. The visual work of poets like Gerry Gilbert, Maxine Gadd, and Ed Varney operated in a transitional medium between purely linguistic and visual art and derived creative and communication benefits from both.

Influence between the arts was cross cultural, hence the name Intermedia. The photographer Michael de Courcy, for instance, included a poem as one of the faces of his box art which was displayed at the museum of Modern Art in New York and in Vancouver.

Dennis Vance produced sound sculpture exploring the effects of random movement through space triangulated by three distinct radio signals. As the sculpture swung, the listener, in a capsule like an astronaut, picked up different messages which collaged themselves into an aural experience symbolic of the random nature of our electronic age.

Intermedia Press began when poets who hung out there began using Intermedia's mimeograph machine, the Roneo, to produce early books. Openings and Heat in the Heart were the first two 'books.' It is more accurate, however, to call them collections bound in unusual ways rather than 'books.' Openings was collected in an envelope and Heat in the Heart was held together in a box donated by MacMillan Bloedel and had a self addressed stamped envelope for reader feedback.

Artists at Intermedia were also intensely interested in the nature of process. Poets and visual artists of The Press, as Intermedia Press came to be called, were exploring the medium as they were using it. They printed and bound their own books as a way of uncovering meanings and abilities embedded in craft. Heat in the Heart, for example, was run off one page at a time and each page was taped to a window at Intermedia's then current location on Fourth Ave over a period of months. The window filled as the book grew and passersby could participate in the process of growing a collection as new poems were written and printed. It was a unique way of visualizing the book as it came into existence. De Courcy, as was his habit, documented this and much else that was Intermedia.

In its own way, Heat in the Heart, conceived of as an extended performance piece, was an example of Intermedia artists reaching out into the community. Poetry readings, shows and performances were given throughout the lower mainland and in Victoria. Regular Thursday noon lunch/poetry readings were held at the Vancouver Art Gallery, and for a few years Intermedia took over the entire gallery for a week. Then the loose collection of artists that was Intermedia, poets, film makers like Dave Rimmer, videographers, musicians like Don Druick and Al Neil, sculptors like Glen Toppings, potters and conceptual artists like Glenn Lewis, dancers like Karen Rimmer (Karen Jamieson), sound sculptors like Dennis Vance, painters like Michael Morris, Gary Lee Nova, Gregg Simpson, photographers, and others were gently herded together with the help of Werner Allen and the Vancouver Art Gallery's Marguerite Pinney. It was an exciting opportunity for many Vancouver artists to collaborate and showcase their work and for the gallery to host and celebrate with the local art community.

With the help of John MacDonald, The Press bought its first offset, a Rotoprint. That summer we created "Junk Mail,"; a remarkable and enduring collection and collaboration from a large number of local artists working in many disciplines. A collection of individual cards encased in a blank Rothman's box donated by Benson & Hedges, "Junk Mail"; was sent through Canada Post as an unsolicited art gift.

Over the years, as artists moved on, the Press carried on producing books like my A Book of Days, Carole Itter's The Log's Log, and works by Jim Carter, David West, Gregg Simpson, Nellie McClung, Judith Copithorne and others. Our last major collaborative project was The Poem Company, a weekly, anonymous 8 page arts magazine we carried on for a year, mailed for free and then collected and bound. It is a collector's item if one can be found.
When Intermedia itself was no more, The Press began printing catalogues and posters for three of our local art galleries: the Vancouver Art Gallery, the Burnaby Art Gallery and the Surrey Art Gallery. They were great friends and supporters. The first full colour work we printed was a poster for the Vancouver Art Gallery produced on a vintage single colour Miehle offset press. It was a great press and we did a great job!

By this time, Intermedia Press had dwindled down to Ed Varney and myself. We put ourselves through VVI (Vancouver Vocational Institute) and built The Press into a sophisticated, award-winning printer as our two Benny's (Printing Industry of America) attest. With the help of CASE (Counseling Assistance for Small Enterprises) counsellor, Charlie Young, we learned the business of business and won Canada's first Small Business Award.

Eventually, we moved to Intermedia Press's final home in Mount Pleasant and discontinued publishing. When Ed left, Intermedia Press Limited was down to one shareholder, and for the next twenty-odd years developed into a viable printing company employing over thirty people. In 2003, the company was sold.

During all the years of commerce, I continued to write poetry but after my fourth book, Dream Surgeon, did not publish. Then, post 'retirement,' I began a ten-year journey to my next book. I worked with poets Karen Solie, Robert Hass, Don McKay and others and began publishing individual poems.

In 2014, Loose to the World was published by Ronsdale Press. Despite a forty year gap, I find the continuity of concerns remarkable. There is, however, one major difference. Now, the poetry is for itself.