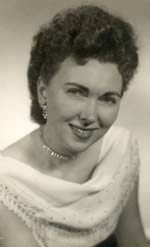 
Elfreida Read was born Elfreida Ennock in 1920 of German and Estonian parents in Vladivostock--where her grandfather had earlier been offered a judgeship. When she was three years old her family was forced to flee with few possessions and little money to the International Settlement at Shanghai. There her father felt fortunate to get a job with a Swiss firm where his fluency in five languages was useful. After the attack on Pearl Harbour signalled the Japanese entry into the Second World War, she and her British husband, George Read, who she had married when she was 20, were interned in a concentration camp as enemy aliens. "I saw human nature stripped of every disguise," she said. "I came face to face with my own strengths and limitations. The friends we made and the hardships we endured will never be forgotten." Conversely, she told Ray Chatelin of The Province in 1985, "Well, the truth is, nothing desperate happened. In fact, the four years were rather pleasant, because the concentration camp was run by Japanese consular officials. We even h had concerts every weekend. That's where I learned about classical music. Of course it got worse as the war went on. There was less food, but everyone suffered the same problem."

During her incarceration Elfreida Read battled malaria and typhus. After the war, during the year she left China for Vancouver, she had her first child, Jeananne (Jeani), in 1947. She was almost prevented from emigrating due to the discovery of a spot on her lung. This was the first sign of what would later become a bout with tuberculosis from which she recovered in a sanatorium in Vancouver, where the family settled. She had a second child and began writing books for young children, as well as young adult novels and plays. Three of her early stories use a theme of Chinese mythology. Other titles include The Message of the Mask, and her 1974 novel for older boys, Brothers by Choice, which became the basis for a Canadian TV movie of the same title. Her autobiographical writing, of her life in Asia, began with a collection of poetry, Growing Up in China (Oberon, 1985), which won a CBC national award. Her prose autobiography took the form of a trilogy she called Days of Wonder, consisting of A Time of Cicadas (Oberon, 1989), Guns and Magnolias (Oberon, 1989) and Congee and Peanut-Butter (Oberon, 1990). Her reflective memoir concerning her life in Canada is Fresh Lettuce and New Faces (Oberon, 1992). The fifth and final volume of her memoirs, The Icing on the Cake (Oberon, 1994), was published when she was 74. Her daughter Jeani Read, a columnist for The Province, has published one collection of her columns and collaborated with her husband Michael Mercer on a number of short TV screenplays, one of which was nominated for a Gemini Award.