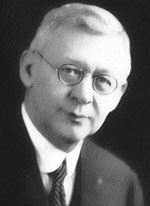 
Lawyer and historian Robie Lewis Reid (1866-1945) of Vancouver was one of the mainstays of the B.C. Historical Quarterly, serving on its advisory board for many years since its inception in 1937. Also a member of the B.C. Historical Association since its organization in 1922, he was a noteworthy bibliophile who published British Columbia: A Bibliograhpical Sketch. Reid bequeathed his library of 9,000 books and 4,000 historical pamphlets to the University of British Columbia.

The Assay Office and the Proposed Mint at New Westminster (Victoria: Charles F. Banfield, 1926). Printed by the authority of the Legislative Assembly.