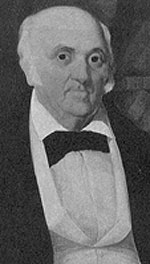 American-born Stephen Reynolds, at age twenty-eight, embarked for the Pacific Northwest as a fo'c'sle hand on the 95-foot, 281-ton brig New Hazard in 1811, having left Boston equipped with pen and ink, evidently eager to record his impressions in a log. Although Reynolds was not exceptionally literate, he does record reading the 1754 novel by Samuel Richardson, Sir Charles Grandison and the Honourable Miss Byron, during his visit among the Haida in August of 1812. Reynolds' rare record of an ordinary seaman's perspective recounts two extensive visits to the Pacific Northwest, chiefly around the Queen Charlotte Islands, with brief sojourns in Hawaii and a voyage to the Orient. His name was recorded as Stephen Runnels on the crew list because it was only after the Revolutionary War that his father Enos Runnels changed the family surname to Reynolds.

Life aboard the New Hazard was particularly brutal. The oldest man aboard was aged thirty-three. Neophyte Captain David Nye, Jr., and his mate Samuel Gale, according to F.W. Howay, "were tyrants of a type rarely found in the American merchant service."; There were 28 floggings and "rope's-endings"; during the voyage.

After sailing north from Hawaii, the captain gave the cabin boy a "catting."; Of 19 foremast hands, only eight escaped flogging. Reynolds himself was once flogged and put in irons after he and four others went ashore on June 11, 1811, without permission, near the northern tip of Vancouver Island.

On January 22, 1812, the Captain requested Reynolds to alert him in advance if a rebellion was in the works. Eleven days later another crew member was put in irons and threatened with death for tossing his bread allowance overboard.
Reynolds explained, "... Sebre Pratt, was dissatisfied with his allowance of bread. Mr. Hewes weighed it; said the allowance was full; upon which Sebre threw it overboard. He was shortly called aft; was ordered to be tied up. He cried out, 'Help! Help!' All hands went up to release him; the captain threatened to shoot them. Sebre was taken in the cabin; put in IRONS. Captain told them he had been told they were going to take the ship from him. I was charged with telling the news to captain because I was in cabin a few nights since after a shirt. ALL IS BUZZ!!!! Mutiny aborted! Normal hell restored!";

With the supply of sea otters severely depleted, and competition for them fierce, slave trading formed part of the expedition's commercial activities. On June 20, 1811, Reynolds recorded, "Sold all shrowton [oolachon oil] and two slaves: one slave five skins, one, three."; Four more slaves were purchased by the ship at Cape Flattery on August 1. Following their captain's lead, sailors aboard the New Hazard later traded for slave women obtained from the Haida.
Due to the increasing competition for furs, the New Hazard spent an entire winter in the vicinity of the Queen Charlotte Islands. "Wednesday, 11 December. Setting coal-pit; sawing boards. Mr. Hewes ashore all afternoon. Two girls on board all night. Mr. Bruce sent me a fathom of India cotton last evening, for which I very much thank him. At eight got under weigh, towed out of the Key where we left some thin ice.";

In 1812 there were at least 13 ships on the coast, including the New Hazard, Lydia, Packet, Albatross, Amethyst, Atahualpa, Beaver, Charon, Isabella, Katharine, Hamilton, O'Cain, Mercury, Pedler and possibly Sylph. The Lydia, under Captain James Bennett, and the New Hazard sailed together for several months. Whereas most of the ships that visited the Pacific Northwest in the early 1800s were Boston-owned, the New Hazard, built in Newberry in 1810, as well as a ship named Packet, were both Salem-owned.

On July 10, 1812, near Masset, Reynolds reported their ship was approached by the "long-wished-for"; Packet from Salem, under Captain Bacon, which had sailed from Boston in 1811 to relieve them. "Upon hearing this, the joy was so great that it almost made the dumb to speak,"; he writes.

The New Hazard proceeded to Hawaii for supplies and sandalwood, crossed the Pacific to Canton in December of 1812, returned to Hawaii, sailed around South America and evaded a British naval barricade in order to reach the wharf at New Bedford on Christmas Day, 1813. The New Hazard sank after only eight years of service, during a voyage from Salem to Batavia in 1817.

Also in 1817, Reynolds sailed to the Pacific coast of South America on the Ida, then settled for the majority of his years in Hawaii where he married Susan Jackson in the 1820s and had five children. Reynolds maintained a diary of his life in Hawaii from 1822 to 1855.

Born on November 18, 1782, at Andover in Massachusetts, Reynolds died at age seventy-four at West Boxford, Massachusetts on July 17, 1857.