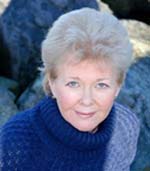 
In her debut novel, The Midwife of Venice (Doubleday 2011), former family lawyer Roberta Rich tells the story of Hannah, a barren Jewish midwife living in the Venetian Ghetto Nuovo. Hannah risks her life and endangers her ghetto to save a Christian Conte's baby so she can ransom her husband, who was captured at sea. A historical fiction, The Midwife of Venice is set in the late 1500s, when the bubonic plague ravished Europe and the Inquisition forced Jews to convert or flee. The novel shows the strength of the human spirit and depicts how human compassion can transcend racial and religious differences.

Having gained bestseller status with The Midwife of Venice, Roberta Rich will release a sequel in October of 2013, The Harem Midwife (Doubleday $22.95) in which Venetians in exile, Hannah and Isaac Levi, have set up a new life for themselves in Constantinople. While Isaac operates in the silk trade, Hannah plies her trade as a midwife within the opulent palace of Sultan Murat III, tending to the thousand women of his harem.