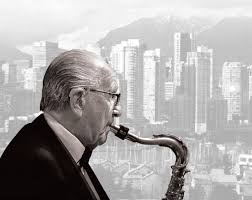 
British Columbia's best-loved musical personality is not Bryan Adams or that Nanaimo gal who plays the piano. It's gotta be 91-years-young Dal Richards, whose band had 154 gigs in 2008. Back in May of 1940, he replaced Mart Kenney and his Western Gentlemen in the Hotel Vancouver's new Panorama Roof Ballroom with an 11-piece orchestra and an unknown 13-year-old singer named Juliette. Richard's six-week contract was extended for twenty-five years. The legendary bandleader, saxophonist and clarinetist, born in Vancouver in 1918, sold out The Orpheum at age 90. Certainly more British Columbians have danced to the live music of Dal Richards than any other musician. The remarkable career of Dr. Swing, over more than eight decades, has been outlined in a memoir, One More Time: The Dal Richards Story (Harbour 2009; re-release Harbour 2014), co-written with Jim Taylor.

Dal Richards was chosen by his local MLA Mary McNeil (Vancouver False Creek) as her 'delegate' for the torch run. He went into training by attending exercise classes at the Roundhouse Community Centre and swimming lengths at the YWCA pool. One of the torch relay organizers brought up the concern about Dal having to hold the torch up while he ran (because of its weight). That person was reminded that Dal Richards regularly carries his saxophone around his neck, and waves it in the air at the end of a number. End of discussion.