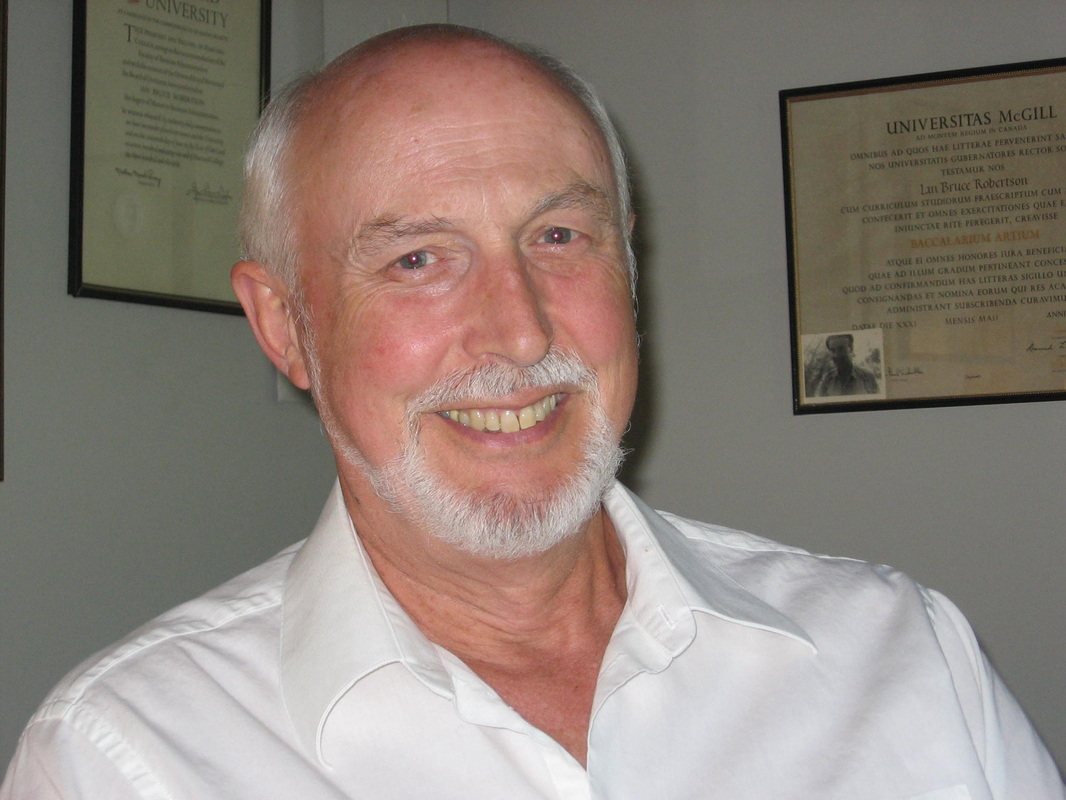 
Born on June 20, 1940 in Montreal, retired businessman and self-publisher Ian Robertson of Nanoose Bay grew up in B.C. until leaving to attend McGill University in 1959. He worked and lived abroad with his family until returning to Canada in 1978. His father's ancestor Dr. Alexander Rocke Robertson came to Canada in 1830; his mother's ancestors came to Canada from Scotland around 1900. His book The Honourable Aleck is creative non-fiction about the life and times of Alexander Rocke Robertson and Margaret Bruce Eberts, Aleck's beloved wife 'Maggie'.

"'Aleck' Robertson came to British Columbia in 1864 as a young lawyer, and became one of BC's most eminent citizens. Well-known and highly respected in BC's courtrooms, he was also Mayor of Victoria, a member of BC's first provincial Cabinet, and BC's first Canadian-born Supreme Court Judge, all before his untimely death at the age of 40. The combining of the colonies of Vancouver Island and British Columbia, and then confederation with Canada, give a dramatic backdrop to the story. Aleck's passionate correspondence with Maggie throughout their lives, and their warm and loving family life with their many sons in early Victoria, show the human side of those turbulent times in early BC."

According to the same website, the author's first book recalls the life and times of a young Canadian surgeon named Rocke Robertson during World War II:

"While Bullets Fly deals with an aspect of the Second World War not often covered in the popular literature, namely the delivery of medical services to the frontline troops. It describes a new approach that had to be taken to this vital subject because warfare had become mobile and fast moving, meaning that wounded soldiers would often be stranded too far from medical facilities to be saved.

"A soldier is badly wounded in a mobile, fast-moving theatre of war. Without rapid surgery, he will die. There are no helicopters to move him out to a hospital. This was the problem faced by the military medical authorities in the Second World War. Their solution: take the medical services to the wounded! They set up mobile ambulance units, field dressing stations and blood transfusion units, all based on trucks so that they could move swiftly to keep up with the troops.

"They also set up field surgical units, which were mobile operating rooms based on three trucks and managed by the surgeons themselves. They operated in everything from tents to wine cellars, abandoned schoolhouses and hospitals to monasteries and cathedrals. Working often in conditions that would be condemned in modern hospitals, they did whatever it took to save lives.

"While Bullets Fly tells the true story of one such unit, the 2nd Canadian Field Surgical Unit under the command of the young surgeon Rocke Robertson: from its set-up and training in England to the historic Allied landings in Sicily; through the killing grounds of central Sicily and southern Italy to the horrific Battle of Ortona on Italy's Adriatic coast. Operating in stifling heat and raw cold, fighting off dust, flies, exhaustion and malaria, they dealt with wounds and patient loads that stretched their imagination, ingenuity and strength to the breaking point.

"These units were the precursors of the Mobile Army Surgical Hospitals in the Korean War, where the wounded soldiers were transferred swiftly and smoothly by helicopter to a medical facility set up well behind the front lines."

Review of the author's work by BC Studies:
The Honourable Aleck: Love, Law and Tragedy in Early Canada