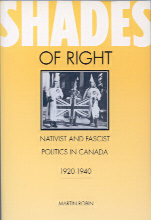 
Martin Robin's twin histories of British Columbia are The Rush for Spoils: The Company Province (1972) and Pillars of Profit: The Company Province 1934-1972 (1973), the latter being one of the few critical views of W.A.C. Bennett's premiership. Robin has described early Socreds as a "drab collection of monetary fetishists, British Israelites, naturopaths, chiropractors, preachers, pleaders and anti-semites." [Other books on W.A.C. Bennett are Paddy Sherman's Bennett in 1966 and Ronald Worley's The Wonderful World of W.A.C. Bennett. Also see David Mitchell.]

An SFU political scientist, Robin has also explored the roots of extreme right-wing and racist groups in Canada between 1920 and 1940 in Shades of Right: Nativist and Fascist Politics in Canada, 1920-1940 (University of Toronto Press, 1992). He starts by charting the rise of the Ku Klux Klan and provides a detailed account of Adrien Arcand's National Social Christian Party. A chapter of the Ku Klux Klan opened in Vancouver in 1925 and attracted 500 people to a meeting in 1927. It argued for a ban on Oriental immigration and the confiscation of property owned by Asians--laying the groundwork for the government's expropriation of land and possessions from Japanese-Canadians during World War II.

The Rush for Spoils: The Company Province (McClelland & Stewart, 1972).

The Bad and the Lonely: Seven Stories of the Best--and Worst--Canadian outlaws (James Lorimer, 1976)

The Saga of Red Ryan and Other Tales of Violence From Canada's Past (Western Prairie Producer, 1982).