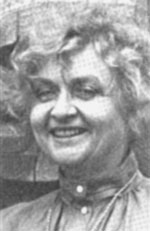 
Born and educated in California, Irene Robinson worked a variety of jobs included speechwriter for a U.S. Congressman until she settled in Vancouver where she raised three sons. She wrote more than 22 original dramas and adaptations for CBC radio and returned to San Francisco write for a 13-week PBS series. After stints in Los Angeles and Europe, she re-settled in Vancouver. Written under the pseudonym Jo Manning, her 1981 romance novel Cherished Destiny (Worldwide Library, 1981) was translated into German, Portuguese, Spanish, Dutch, Japanese, Italian and Swedish. She died in Vancouver in October of 2004.