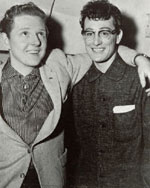 
Usually cited as Vancouver's first rock 'n' roll deejay, Robert Gordon 'Red' Robinson was born in Comox, B.C. on March 30, 1937. He started his career in radio by contributing to Al Jordan's afternoon show for teenagers on CJOR in 1953. They made contact after Robinson phoned into the show impersonating Hollywood actor Jimmy Stewart who was visiting Vancouver at the time.

Red Robinson's first program called Theme for Teens has been described as the first scheduled radio program for rock 'n' roll in Canada. As soon as he graduated from high school in 1954, Robinson became an on-air host, befriending major artists who came to play in British Columbia and frequently serving as an emcee for the likes of Elvis Presley (1957) and The Beatles (1964). For EXPO 86, he presented 40 acts for Legends of Rock'n'Roll that included Ray Charles, Roy Orbison, Fats Domino, Jerry Lee Lewis and The Righteous Brothers.

On October 23, 1957, as the host of the Teen Canteen program on CKWX, Robinson also hosted two shows for the Biggest Show Of Stars For 1957 at the Georgia Auditorium featuring Buddy Knox, Jimmy Bowen, Frankie Lymon, Eddie Cochran, The Everly Brothers, Paul Anka and Buddy Holly. Robinson vividly recalls conducting a three-minute interview with Buddy Holly prior to the show. "We were both kids, neither one of us thought rock 'n' roll would last. He even stated this in his interview." Robinson was proud to be recognized by Buddy Holly at the time as the first disc jockey in North America to list the song "That'll Be The Day"; in Cashbox magazine. At that time, just 12 deejays in North America contributed their most requested hits, ten in all, to Cashbox. "Buddy felt I was the one most responsible for launching the career of The Crickets," says Robinson. "He recognized this during the interview.... Buddy was one of the nicest people I have ever met. He was fun loving & relaxed, who could have been a chum that I had gone to school with. Even the tough touring schedule did not bother him as it was an exciting time, a time of innovation, a time of youth. In those days, they did two or three songs, and then on to the next act. It's interesting to note that after his untimely death I added a new facet to my own career & began booking rock & roll acts. In 1962, '63 and '64 I booked The Crickets in the Vancouver area and became friends with Sonny & JI...a friendship that has survived to this day. I will always treasure my meeting with Buddy. There was only one...he is gone but his legacy lives on.";

A 1957 photo [at right] of Robinson and Buddy Holly has been misrepresented as a photo of Buddy Holly with bad boy rocker Jerry Lee Lewis, much to Robinson's amusement.

Red Robinson first worked in television when he went to work at KGW radio station in Portland in 1959. He returned to Vancouver to become program director at CFUN in 1961, then operations manager at CJOR in 1968, followed by a long stint at CKWX from 1971 to 1983. From 1985 to 1993 he hosted a cross-Canada 'Oldies' program called Reunion, then switched to a local Oldies show for CISL for which he continues to broadcast on Sundays. Having long gained an understanding of the radio business and media promotion, Robinson started his own management company in 1988, chiefly working in the field of advertising, having become a provincial icon in the Fifties, Sixties and Seventies for his cheerful manner in the style of dependable sports broadcaster Jim Robson. Red Robinson became the third Canadian broadcaster inducted into the Rock and Roll Hall of Fame in the U.S. in 1994. As the veritable Dick Clark of Vancouver pop music, Robinson was inducted into the Canadian Broadcast Hall of Fame in 1997 and the Rockabilly Hall of Fame in 2000. Like his fellow broadcaster Jack Cullen, Red Robinson has long been an ardent collector of music memorabilia, amassing an extensive collection of photos. Some of these appear in Backstage Vancouver: A Century of Entertainment Legends (Harbour, 2004), co-written with Greg Potter, a journalist and amateur guitarist who wrote Hand Me Down World: The Canadian Pop-Rock Paradox (1999).