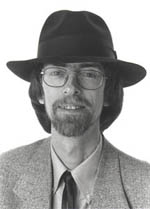 
As described by the Vancouver Public Library in 2010, when Spider Robinson became its writer in residence: Spider Robinson is the author of 36 novels published in 10 languages, including the long-running series of raucous tales centered around Callahan's Crosstime Saloon, and The Stardance Trilogy.

In his long career, Robinson has won the John W. Campbell Award for Best New Writer, three Hugo Awards, a Nebula Award and countless other international and regional awards. In 2008 he won the Robert A. Heinlein Award for Lifetime Excellence in Literature.

EMPLOYMENT OTHER THAN WRITING: folksinging

"Spider Robinson was born in New York City on 3 successive days (they had to handle him in sections), and holds a Bachelors degree in English from the State University of New York. In 1992 he was the Toastmaster for the 50th World SF Convention in Orlando. He was book reviewer for Galaxy, Analog and New Destinies magazines for nearly a decade, and currently writes occasional book reviews and a regular Op-Ed column, "Future Tense," for The Globe and Mail, Canada's national newspaper. He has been married for 28 years to Jeanne Robinson, a Boston-born writer, modern dance choreographer, former dancer, and teacher of dance and the Alexander Technique, and lay-ordained Buddhist monk (Soto Zen lineage); she was Artistic Director of Halifax's Nova Dance Theatre during its 8-year history. They met in the woods of Nova Scotia in the early 1970s, and have since lived in British Columbia where they raise and exhibit hopes. The Robinsons collaborated on the Hugo-, Nebula- and Locus-winning 1976 classic novel STARDANCE [Baen Books pb, Dec 91; Easton Press leatherbound 92], which created the concept of zero-gravity dance, and on its sequels, STARSEED [Ace hc and pb, Oct 91/92, Easton Press leather 91] and STARMIND [Ace hc and pb, Easton leather, June 95/Feb 96]. (Jeanne was on NASA's short list for a Space Shuttle seat, to try out zero-gee dance in practice -- until the Challenger Tragedy ended the Civilian In Space programme.) Their first two books were reissued together in one volume as THE STAR DANCERS by Baen Books in September 97. The final volume, STARMIND, was also reissued by Baen, in May 2001. The Usenet newsgroup alt.callahans, inspired by Spider's Callahan's Place series, was rated the 151st largest newsgroup by bits posted, 172nd by messages posted (placing it in the top 1%), and propagates to over 60% of all Usenet sites, as well as IRC and other cyberbyways. Some claim it is the largest non-porn newsgroup. Mike Callahan has also appeared as a character in Marvel Comics' SPIDERMAN." (2003)

"Smelly is a hermit by necessity. He's the world's most receptive telepath--and it hurts. His old college roommate Russell, a Sixties survivor entering his sixties, is one of the few people Smelly can stand to be near. But now sinister government forces are after them both for unknown dark purposes, and Smelly and Russell must depend on Nika, one of the straightest cops in the world, to help them and Russell's visiting son Jesse dodge deadly peril in the dark. Before long Russell finds himself literally up Howe Sound without a paddle--and with a collapsed lung...."

THE STAR DANCERS [with Jeanne Robinson; Baen pb (1997)] (combined-reprint of STARDANCE and STARSEED)

(Note: The Hugo and Nebula are science fiction's top international honours. The Science Fiction Achievement Awards, popularly called "Hugos," are (with the Campbell Award) given annually by worldwide popular vote--making them virtually unique among arts awards. The Nebulas, analogous to Oscars, are awarded annually by vote of working professional sf writers, members of Science Fiction Writers of America.)