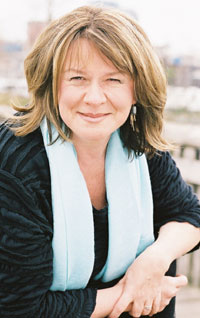 
From Gabriola Island, nationally known CBC broadcaster Shelagh Rogers contributed the foreword to Nobody's Mother: Life Without Kids (Touchwood, 2006), edited by Lynne Van Luven. She wrote: "There are a lot of things I feel I am grasping at last: being comfortable in my own skin, beginning to feel oddly sexy at a time when Germaine Greer says women become invisible to society. I am excited about what the next act will bring. There's some mystery to it. But one thing I know for sure: it will not bring children I bear myself. And finally, I am happy with that."

Today's young women are better educated and more independent than they have ever been; yet many of them still grapple with questions about society and their role within it. They wonder how best to combine their careers with satisfactory private lives. They are skeptical about feminism and unsure about their futures. Popular media has inundated them with a conflicting miscellany of terms: the Glass Ceiling; the Mommy Track; Double Income No Kids (DINK); and perhaps most unnerving of all, the Yummy Mummy.

In Nobody's Mother: Life Without Kids, editor Lynne Van Luven has brought together a thoughtful group of 21 women of various ages and backgrounds whose frank essays about being childless are probing, provocative and entertaining. Some of the essayists are child-free intentionally, some by circumstance, some by a simple twist of fate. But all the contributors to this lively anthology have one thing in common: they are content with their lives and do not view themselves as freaks or failures because they have not had children.

With a foreword by broadcaster Shelagh Rogers, Nobody's Mother is not only a wonderful resource for women's studies programs across North America, but also an illuminating look at a choice that, according to some statistics, one in 10 women is making.

Lynne Van Luven has been either a journalist or a teacher for the past 30-something years. She is the editor of Going Some Place: Creative Non-Fiction Across Canada, the first Canadian anthology of creative non-fiction ever published, released by Coteau Books in 2000. She has been teaching journalism and non-fiction at the University of Victoria since 1997. She has a PhD in Canadian literature and is the Director of the Professional Writing Minor in Journalism and Publishing at the University of Victoria's Department of Writing.


Having moved to Vancouver from Ontario to host Sounds Like Canada nationally on CBC Radio, Shelagh Rogers provided the introduction to Mike Grandmaison's photography book entitled Canada (Key Porter, 2005). Rogers began her radio career in 1980 in Ottawa, joined an arts program in 1986 that became The Arts Tonight, then emerged as deputy host of Peter Gzowski's Morningside. Mike Grandmaison lives in Winnipeg.


Twenty-one non-mothers who are skilled writers-such as Kate Braid, Maria Coffey, Lorna Crozier, Maggie de Vries, Katherine Gordon, Hannah Main-van der Kamp and Rita Moir- have contributed to Nobody's Mother: Life Without Kids (Touchwood $19.95), edited by Lynne Van Luven (above right). It provides a forum for women without children to examine their various choices and circumstances. Roughly one in every ten Canadian women is choosing not to have babies. Written on Gabriola Island, here is the foreword to Nobody's Mother by CBC radio host Shelagh Rogers.

I have just turned 50 as I write this. There are a lot of things I feel I am grasping at last: being comfortable in my own skin, beginning to feel oddly sexy at a time when Germaine Greer says women become invisible to society. I am excited about what the next act will bring. There's some mystery to it. But one thing I know for sure: it will not bring children I bear myself. And finally, I am happy with that. But it has taken a while.

The first flush of baby-love rose up in me like a primordial swell when I was in my late 20s. It seemed to arrive overnight. I felt I was swimming in that lake where women down through the ages had swum. And I needed to find a mate. (It really wasn't quite that clinical but, looking back on it now, I see it as, if not an imperative, at least some kind of directive.)

As so often happens, as soon as I stopped consciously searching, I found "the guy."; If I'd had a list at the time, every box would have been checked off. He looked like Gary Cooper, he loved Mozart and Bessie Smith, he was a writer, he played hockey, he was funny (worked on the Harvard Lampoon!). He wrote me a letter a day for years, even when I was in the next room.

But it didn't work out with him. And just as that fact was sinking in, I had days on end when I felt fatigued, nauseated, headachey, sick to my stomach, when I had pelvic pain. And then I missed a period. I went back to him and said, "Hey, I'm pregnant,"; like some film-noir heroine in a last-ditch attempt to keep her man from slipping away. It didn't change his mind about us. I felt angry and sad and decided not to continue with the pregnancy.

It turned out I wasn't pregnant at all. What was growing in there were some advancing cervical cancer cells. I had the surgery and "poof,"; they were gone. After that, it was six-month rounds of (can we talk, sister?!) pap smears and cone biopsies. I was told I might not have been the best candidate to have children anyway because I had a severely prolapsed uterus.

Prolapsed. That was the word. It described exactly how I felt, as though I had fallen or slipped out of place, like my uterus. And just as I was trying to deal with this, all of a sudden almost every woman I knew was having a baby. I was happy for them. I had to be. They seemed focused, serene, fulfilled. As their worlds became smaller, their hearts became larger. Even if they were exhausted, they seemed to glow. And they were swimming in that lake I wanted to swim in, where women could just look at each other with a deep, shared understanding that they were all part of a chain of life.

I felt very unhappy for myself. I wanted in, and for a lot of reasons, I was out. No partner, bad physical prognosis, demanding job which I let consume me. Despite my outward mantle of success, I was sick at heart. And I didn't deal with it very well. Believing I had nothing to offer them beyond my imagining of motherhood, I withdrew from some of my oldest child-bearing friends. I was openly jealous of my sister, a new mom with a different, more profound relationship with our mom. So I got to be a failure on a number of fronts: as a woman, sister and friend. And for years, I wallowed in it.

But gradually, the wave of baby-desire receded.

Then I got together with the man I would eventually marry. He already had children: one son in his 20s, a daughter in her mid-teens and a son who was 10. I felt The Wave coming back. I wanted a child of our own.

My husband felt he already had a family, and indeed he did. I remember talking to him about the extraordinary measures I would go to, to have a child. And he would have to reverse a vasectomy. But it wasn't going to happen. I was so frustrated and hurt to recognize this last chance eluding me that I picked up a salt cellar and hurled it into a wall. It made a perfect, cellar-like indentation-a mark of my anger that I refused to cover up.

I started to work on a relationship with my husband's kids. It took us some time to get used to each other. I knew I wasn't going to step into a mothering role with them. They had (and have) a perfectly lovely woman who is, in fact, their mother. At first, I thought I would be lucky if we could be sort-of friends. It was a rough couple of years, mostly because I tried too hard to do things for them and was sickeningly nice. Fortunately, I couldn't keep it up; the more human I became, the more we started to communicate. I never, however, felt at all maternal-more fraternal than anything.

We have all warmed up to each other. I can say without reservation that I love them and I am grateful to have them in my life. But I will always wonder (and now my younger friends are having babies and raising children): have I missed out on one of the greatest experiences a woman can have? Are mothers happier? Or just a different kind of happy? Are they more fulfilled? More topped-up as humans? Maybe the answers, whatever they may be, lie ahead in these pages.