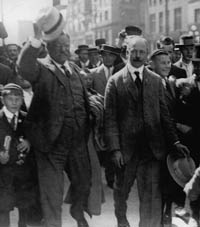 
According to Greg Nesteroff of Castlegar, Theodore Roosevelt first saw B.C. in 1888, during a month-long hunting trip on Kootenay Lake. "While his visit is remembered in several local history books," writes Nesteroff, "few seem to realize he devoted a chapter to it in The Wilderness Hunter (1893), and also mentioned it in subsequent works. Roosevelt biographers, if they remark on this trip at all, usually overlook the fact it was predominantly in B.C., and instead say he went hunting 'in northern Idaho' or in 'Idaho's Kootenai country.'"

While not widely recognized today as a literary man, the 26th president of the United States, born on October 27, 1858, first rose to prominence as the 23-year-old author of The Naval War of 1812, hailed as a literary and scholarly triumph. Roosevelt rose to military prominence due to jingoistic newspaper reports that inflated the heroism of his Rough Riders as they overcame out-manned, under-supplied Spanish opposition in Cuba in 1898. Roosevelt's robust account of his adventures during the so-called Spanish-American war [really the Spanish-Cuban-Filippino-American War] entitled The Rough Riders catapulted him into the political arena in 1899. He served as governor of New York (1899-1901); vice-president of the U.S.A. (1901); and president (1901-1909). The man most famous for saying, "Speak softly, and carry a big stick; you will go far," received the Nobel Peace Prize in Peace in 1906. He visited Vancouver in 1915. Mayor Louis Dennison Taylor outwitted his political foes by hopping on the train as it stopped in New Westminster, then grabbing the spotlight upon Roosevelt's arrival by escorting him around Stanley Park in his car. Roosevelt died in 1919.

The Naval War of 1812
The Rough Riders
Theodore Roosevelt: An Autobiography
Hero Tales: How Commmon Lives Reveal the Uncommon Genius of America. With Henry Cabot Lodge'
The Strenuous Life (Little Books of Wisdom)
Hunting Trips of a Ranchman & The Wilderness Hunter

PHOTO AT RIGHT: Overshadowed by flamboyant Teddy Roosevelt (waving his hat) in 1915, Vancouver mayor Louis Denison Taylor (to the right) was a secretive man who made up in endurance what he lacked in zest. The accused embezzler served as mayor for a record eight terms, during three of the city's most formative decades, bouncing back to run each time he was defeated.