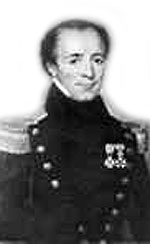 
Lieutenant Camille de Roquefeuil of France twice explored the coast of British Columbia during a voyage of 1816-1819, a circumnavigation of the globe intended to increase French prospects for commerce in the aftermath of Napoleon's overthrow. His unedited journal provides one of the most complete records of Aboriginal life in early 19th-century British Columbia. One of the two maps in his book is a detailed view of the world. The other shows the Pacific Coast from Alaska to California.

"Due to various circumstances and to certain timidity,"; according to the introduction to the French first edition, de Roquefeuil refrained from having his journal printed in 1820 when it was completed. He gave it to his family, allowing them to do with it as they pleased, whereupon one of his brothers shepherded the travelogue into print in 1823, eight years before he died. Although de Roquefeuil succeeded in making the third French circumnavigation of the world, under official government auspices, he was not promoted upon his return.

De Roquefeuil sailed from Bordeaux, in his ship the Bordelaise, in October of 1816 and arrived at Nootka, via Chile, in September of 1817. He carried 35 crewmen and three officers. Theirs was the first expedition to describe conditions at Nootka since the massacre of the Boston's crew and the enslavement of John Jewitt. De Roquefeuil gave Maquinna a seven-gun salute.

The French obtained some furs at Barkley Sound, and de Roquefeuil described a village of "Nitinat"; south of Nootka Sound. "We saw several men and a greater number of women, whose complexion differed from white only by a tinge of pale yellow. Some young people, of both sexes, had a colour, and many children would have been thought pretty in Europe. The greater number of the Indians have black hair, the remainder a light red, all wear the hair long, and the women comb it carefully, and divide it over the middle of the forehead. Both sexes dress the same as at Nootka, with this difference, that the women wear under their other garments a kind of apron of bark, not woven, but only fastened to a girdle. We saw many well-made women with good arms, but in general, very ugly hands. On the whole they are better looking than the women of Nootka, though there is something harsher in their countenances, chiefly owing to their narrow foreheads, which are wrinkled at an early age. We saw only three or four who in Europe would have any pretensions to beauty. One of them was the wife of Cia, who had received us hospitably; another, the wife of a great chief, was almost white; she had large black eyes, regular features, a fine countenance, and much propriety and dignity in her manners. The women and girls appeared as modest as those of Nootka, and still more reserved.";

In 1817, the Frenchmen also visited a hill at present-day Masset in Haida Gwaii when it was designated as a fortress. De Roquefeuil wrote, "There is something picturesque in the whole appearance of this large village. It is particularly remarkable for the monstrous and colossal figures which decorate the houses of the principal inhabitants, the wide gaping mouths of which serve as a door....Ascending the arm of the sea, there is, on the north side, above the largest village, a fort, the parapet of which is covered with beautiful turf, and surrounded by a palisade in good condition.";

De Roquefeuil wintered in California and returned to the Pacific Northwest in 1818, jointly trading for furs with the Russians at Sitka. Their party was attacked by the Tlingits while they were anchored on the east side of Prince of Wales Island. Twenty of the hired Aleut men, on contract with the Russians, were killed, and the French explorer barely escaped with his life.

Camille de Roquefeuil visited Maquinna at Friendly Cove a second time, visiting Nootka for 19 days overall. Familiar with the unreliable reports of John Meares, who spread the word that Maquinna was likely a cannibal, the Frenchman was taken aback when his ship's doctor found human bones that "led us to believe that they were the remains of a repast of cannibals."; It was explained to him that the bones belonged to dead bodies unearthed by bears, but de Roquefeuil remained ill at ease visiting a ceremonial spot consecrated to festivities related to the whale fishery.

For early explorers, fear of cannibalism spread its reputation as much as any apparent evidence. "I know not whether it was the idea of an abominable repast suggested by the accounts of Meares, which had possessed my mind and cast a gloom over all this scene,"; he wrote. Born in 1781, de Roquefeuil died in 1831.