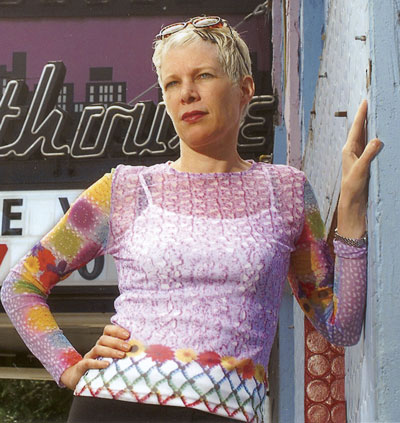 
An associate professor in the Department of Sociology and the Women's and Gender Studies Program at the University of British Columbia, Becki L. Ross is the author of Burlesque West: Showgirls, Sex and Sin in Postwar Vancouver.

Review of the author's work by BC Studies:
Burlesque West: Showgirls, Sex, and Sin in Postwar Vancouver


As UBC sociology professor Becki L. Ross will be the first to tell you, the storied Penthouse night club at 1019 Seymour Street merits a book of its own.

Opened by the four Filippone brothers in 1947, the Penthouse used to attract up to 600 patrons per night as a 'bottle club' (BYOB) to see the likes of Tony Bennett, Sophie Tucker, Sammy Davis Jr., Liberace, Harry Belafonte and Ella Fitzgerald.

Ross Filippone was general manager; Mickey ran the bar (natch), Jimmy was the maintenance man, lifelong bachelor Joe was the flashy front man and sister Florence was the bookkeeper. The Filippones were discriminated against as Italians, for hiring black entertainers and for providing a safe haven for more than 100 prostitutes on any given night.

The city's "oldest stationary funhouse"; started as one of precious few places in staid downtown Vancouver where one could get a decent steak. Police raided the place frequently, but patrons were given hiding places for their booze and there was usually a watchman on the roof to sound the alarm. The Filippones made ten failed applications for a legit liquor license before they succeeded in 1968.

Ten years later, Sun columnist Denny Boyd reflected, "It was the place to go after hours to get a steak, mixer for your bottle, see a show, run into a friend or find a hooker. Make no mistake about it, hookers came to The Penthouse. So did other club owners, musicians, lawyers, safecrackers, corporation presidents, Hollywood starlets, cheating husbands, stockbrokers, school principals, gamblers, plainclothes RCMP surveillance team, PTA presidents, surgeons, drug-users, short-order cooks and-I suspect-the odd man of the cloth.";

Becki L. Ross's Burlesque West: Showgirls, Sex and Sin in Postwar Vancouver (University of Toronto Press, $29.95) necessarily chronicles the colourful Penthouse but her scope is much more ambitious and informative than mere nostalgia or rear-view voyeurism.

Glitzier, westside hangouts like Isy's and The Cave were not allowed to overshadow the eastside clubs such as the New Delhi Cabaret and the Harlem Nocturne run by Choo Choo Williams and Ernie King.

We learn that as early as 1945, headliner Yvette Dare at the Beacon
Theatre had a trained parrot named Jeta that helped her disrobe on stage. Her show was billed as a Balinese dance to the bird god.

Cumulatively, Burlesque West is a superbly researched chronicle of how Vancouver, a city with some of North America's most stringent and puritanical liquor laws for decades, became one of the hotspots for stripping in the 1970s and 1980s.
For the record, the Club Zanzibar (formerly Torch Cabaret), the Factory and Café Kobenhavn introduced so-called 'bottomless' dancing in the fall of 1971. Eventually even Isy's nightclub on Georgia Street would become Isy's Strip City.

Burlesque West is a rare academic work, ground-breaking, accessible, lucid and completely serious. The fact that its author generated a minor stir when she received a major research grant to undertake the study merely proves the need for a frank and public examination of burlesque and its offshoots in the first place.

G-strings came off with the election of the NDP in 1972. The musical Hair had played in Toronto, with full nudity, and no charges had been laid. Hey, if Toronto could handle it....

Café Kobenhavn at 968 Main Street was run by the Satan's Angels biker gang. By 1972, when dancers and staff were charged with presenting an obscene performance, The Province entertainment reporter Michael Walsh testified on the club's behalf by noting he had counted 29 females and 111 males sunbathing nude at Wreck Beach.

The genie, or Jeannie, was out of the bottle.

Just as television had threatened the demise of The Penthouse in the fifties and sixties, back when folks could stay at home and watch Dean Martin and Jerry Lewis on The Ed Sullivan Show for free, exotic dancers in beer parlours for the price of a beer made for even stiffer competition than tv.

Ross Filipponi told Becki Ross: "The hotels started to bring in top-line girls. They were giving the public what they wanted. No cover charge."; The Penthouse and other nightclubs had a cover charge and could only stay open from 7 pm to 2 am, whereas a beer parlour in a hotel could have dancers from noon to 2 am.

As St. Regis Hotel manager Larry Thiesson told The Province, "hotels aren't churches."; And so it was that Vancouver-somewhat bizarrely-suddenly became one of the best places in North America to find bump & grind.

Ross' academic approach, tinged with feminism, does not overlook the fascinating range of characters, such as notorious entrepreneur Gary Taylor, now in his late 60s. Taylor started his career as a teenage drummer backing dancers at clubs like the Smilin' Buddha, and at the PNE's girlie shows.
"It was rumoured that Taylor was a smooth, fast-talking operator who bet strangers on the street that he could get a woman to take her clothes off on his stage,"; Ross writes. "A long-time friend joked that Taylor could talk a nun into going on stage.";

Most of the larger-than-life club owners such as Ernie King, Ross Filliponi and Richard Walters (living in California) reached old age. Isy Walters died in his club of a heart attack. Joe Filipone died in his club with a bullet in his head.

Somewhat nostalgic for the olden days, and always admiring of the artistry and courage of the performers, Ross' examination of burlesque as a business proves equally engaging. We learn that when top-line American dancers such as Sally Rand, Gypsy Rose Lee, Ricki Covette, Lili St. Cyr and Temptest Storm performed in Vancouver during the 1950s and 1960s, they were earning up to $5,000 per week even after they turned forty years of age. "While most female service workers were paid low wages, earning 57 per cent of what men earned doing similar work,"; Ross writes, "only a small number of women in corporations and in the professions of law and medicine matched the income of 'white features' following World War II.";