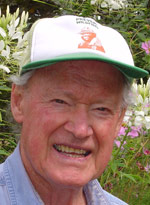 
"The primary evidence of madness in Western culture is the war waged against Earth, the very environment that sustains it. What but madness condones amassing human wealth by destroying nature's wealth?" -- Stan Rowe

"Not a misanthrope, but a defender of Earth against the excesses of anthropes." -- Stan Rowe on Stan Rowe

Born in Hardisty, Alberta on June 11, 1918, as the son of a United Church minister, John Stanley Rowe, one of Canada's foremost ecologists, was a conscientious objector during WW II and wound up teaching high school to Japanese children in the internment camp in New Denver, British Columbia. He had been jailed for several months after arguing that war was morally and ethically wrong. He married a young Registered Nurse, Julia Mary McQuoid, in 1953, in Winnipeg, and he received his Ph.D in botany from the University of Manitoba in 1956. He went on to a long and distinguished career as an ecologist at the University of Saskatchewan, receiving the J.B. Harkin Conservation Award in 1994 for his significant contribution to protecting Canada's parks and wilderness areas.

Rowe was one of the original members of the Saskatoon NeWest Editorial Collective and received an honourary degree from Trent University in 1991 for his environmental work. As a geo-ecologist and environmentalist with a background in botany, forestry and terrain (landscape) ecology, he also worked as a research forester with Forestry Canada for nineteen years, specializing in silviculture and ecological site classification. He was the author of Forest Regions of Canada (1959) and Home Place; Essays in Ecology (1990; reissued 2002).

When he retired to New Denver in 1990, Rowe promptly got arrested in anti-logging protests in New Denver's watershed and met his companion for his final years, Katherine Chomiak. When Rowe died at age 85 on April 6, 2004, flags at the University of Saskatchewan in Saskatoon were lowered to half-mast. Referred to as Volume 2 of the Gospel of St. Stan, his posthumous collection of essays, Earth Alive: Essays on Ecology (NeWest Press 2006), edited by Don Kerr, brought together his writing from the last twenty-odd years of his life. "We are Earthlings," he concluded, "made from stardust, humans from humus, our bones from the old coral reefs uplifted in limestone mountains, our flesh from minerals of Earth's crust mixed with carbon and oxygen from the air."