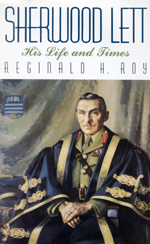 
Born in 1922, Reginald Roy was a professor emeritus at UVic's History Department when he wrote Sherwood Lett: His Life and Times (UBC Alumni Association, 1991), a biographical tribute to Lett, a former Chancellor of UBC who rose to the chief justiceship of B.C. The Sherwood Lett Papers reside in the Vancouver City Archives. As a military historian who served with the Cape Breton Highlanders from 1939 to 1945, Roy also published Ready for the Fray, Sinews of Steel, The Seaforth Highlanders of Canada, 1919-1965, 1944: The Canadians in Normandy, Telegrams of the North West Rebellion (with Desmond Morton) and a history of the Vancouver Club. His 1977 biography of Major-General George R. Pearkes, Lieutenant-Governor of B.C. from 1945 to 1960, is For Most Conspicuous Bravery. Roy wrote David Lam: A Biography in 1997 and a biography of Canuck's owner Frank Griffiths in 1998. The latter was commissioned by the Griffiths family.

Review of the author's work by BC Studies:
For Most Conspicuous Bravery: A Biography of Major-General George R. Pearkes, V.C., Through Two World Wars
The Seaforth Highlanders of Canada, 1919-1965n
Sherwood Lett: His Life and Times


In the metaphor of portrait painting so fundamental to biography, Reginald H. Roy's David Lam: A Biography (D&M $35) may be described as an official portrait. As such, it places its subject in the illustrious company of those whose faces adorn the walls of public buildings reassuring us that our leaders are suitably heroic and that the status quo works. Of course, not all such portraits are flawless. Oliver Cromwell asked to be drawn "warts and all"; and a recent portrait of the Queen drew criticism for making her look like a pensioner just deprived of her bungalow. But admirers of the former lieutenant governor of British Columbia can rest assured that no warts or other blemishes mar his portrait. Much of the substance of the book comes from Lam himself who granted the author weekly interviews over a period of several years.

Although born into a wealthy Hong Kong family, Lam in his early years suffered the hardships which traditionally temper the metal of the young hero. He was eighteen when the Japanese invaded Hong Kong and his college education was achieved at great risk. His adventures included hiking through Japanese occupied China, escaping from pirates and surviving a shipwreck. An education gained at such a price left him with an insatiable desire for learning. Subsequently he mastered several languages, did three years of graduate work in economics in the U.S. and developed skills in such diverse areas as sailing, gardening, scuba diving and cookery. When he emigrated to Canada at the age of forty, with no bonus for his years in the family firm, his expertise and his learning habits served him well. He built up his real estate and development business from scratch. He suffered a brief set back when an NDP government held sway and introduced measures such as rent control which impeded his business transactions and sent him south to San Francisco.

At 65, Lam decided to retire and devote himself exclusively to philanthropic work. He acknowledged his gratitude to the province by numerous gifts to the major universities, the establishment of his Asia Pacific Foundation and by spear heading Vancouver's Dragon Boat Festival. Lam's grandfather had been converted to Christianity by missionaries of the Southern Baptist Convention and Lam's charitable habits are a legacy of his Baptist upbringing.
The pinnacle of his career was his appointment in 1988 as the Queen's representative, the first Asian Canadian to be appointed to the office of lieutenant governor in any province. The final chapters of the book chronicle his characteristically creative contributions to that office.
In a province of great gardens, he is a gardener par excellence and perhaps the contribution cherished by most citizens will be his work in creating beautiful gardens, among them those at Government House in Victoria.