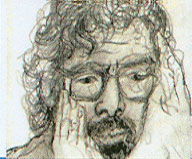 
Born in Malta in 1956, poet and critic Joseph (Joe) Maria Ruggier immigrated to Canada in 1981 and lived primarily in North Vancouver, Burnaby and Richmond. He managed his own literary imprint,  Multicultural Books, and for many years sold books door-to-door. He was also editor of a poetry journal, The Eclectic Muse, co-published with Professor Paul Matthew St. Pierre and his contributing editor Jeffrey Woodward. Ruggier's 1985 book Intelligible Mystery is a scholarly work dealing with the poetry of Rex Hudson. He reported that his 1988 book of poems, The Voice of the Millions, reached a third printing, and his collection of 24 "Shakespearean" sonnets, Out of Blue Nothing, reached a fourth printing. Overall, he claimed to have sold more than 20,000 books, many of them door-to-door, including more than 10,000 books he wrote and self-published. Ruggier claimed there were more than 5,700 copies of his first book Out of Blue Nothing in print. For Ruggier, it was a matter of obstinate pride that he could buck the system and not accept the common wisdom that "poetry doesn't sell." He wrote in Maltese and English. He died at age 61 at his home in Richmond, B.C. on July 8, 2018.

According to an uncredited source on the internet:

He married Maria Julia Raminhos Lourenco in 1984, with whom he raised their daughter, Sarah Thérèse. He attended St. Aloysius' College followed by a B.A. (1st class Honours) in English from the Royal University of Malta and continued his studies in Canada earning a certificate in Writing and Publishing (SFU) and a Diploma in Typesetting (VCC), which he credits for becoming an established publisher... In his final days, he worked fervently, translating work by the Maltese priest, writer and poet, Dun Karm Psaila. Joe was passionate about his faith, family -- most especially his beloved Sarah Thérèse -- international sports (soccer), languages, playing classical guitar and listening to his wide-ranging record collection.  Joe was predeceased by his beloved mother Maria Ruggier (née Micallef). He leaves to mourn his loss his family, Sarah Thérèse and Maria Julia, his father Alfred, his six siblings Paul, Fred, Louis, Mario, Anna, Marisa, and extended family residing in Canada, the USA, Malta, Ireland, and Kenya.

Articles: 2 Articles for this author
A Richer Blessing (Multicultural $21.95)
Info


Black Sheep Books' George Koller has written the preface to A Richer Blessing (Multicultural $21.95), the latest offering of poetry and prose from Malta-born Joe Ruggier. As a self-publisher in Burnaby, Ruggier claims to be at the forefront of a 'true rhyme-revival and a true neo-classicist revival' and he feels his work has not received the critical credit it deserves.
Ruggier edits and manages a periodical called The Eclectic Muse and has recently discontinued his practice of selling his work from door-to-door. He has produced seven previous books, a cassette and 14 issues of Eclectic Muse. 0-9681948-4-4


Regrets hopes regards and prayers (Multicultural Books) by North Vancouver's Joe M. Ruggier, publisher and editor of The Eclectic Muse magazine, is a collection of verses composed during Ruggier's youth.