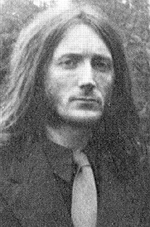 
Born in 1941, electric guitarist and playwright Lawrence Russell was director of Creative Writing at the University of Victoria in the early 1970s.

Articles: 1 Article for this author
Repeat This and You’re Dead
Press Release


These are the stories of untamed bullies, hapless farmers, unsteady veterans, greedy nephews, stuffy uncles, grubby urchins, haunted scavengers, ruthless money grubbers, clumsy terrorists, disenchanted lovers, desperate mothers, estranged sons and exiled eccentrics of every stripe--tales of the outcast and outraged. Russell's style recalls the influences of Irish forefathers--the precision of Joyce, the absurdity of Beckett, and the mysticism of Yeats. Russell's Ireland is not only fist fights and fanaticism, it is also the unimagined peace which occasionally resides in the hearts of the hopeful.