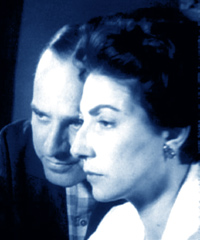 
Now that ex-hollywood star Meg Tilly has been nominated for a B.C. Book Prize, we're pleased to report that the editor for Swedish film director Ingmar Bergman's films in the 1960s, including Persona (1966), Ulla Ryghe, has moved to Victoria and published her memoirs, Travels in Wonderland
(Montreal: Conundrum Press $20).

"I admired that in the editing room,"; she writes, "Bergman was always more intent on getting it right than being right.... Bergman's capacity to let go of self-indulgent and/or superfluous material was also remarkable, and I never saw him fall for the allure of an image even though he clearly loved it.";