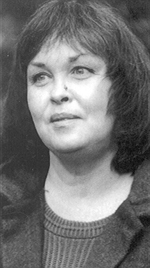 
Jean Rysstad was born in southwestern Ontario but moved to Prince Rupert in 1975. Her first collection of short stories, Travelling In was published in 1990. Her short fiction has won such prestigious awards as the CBC Radio literary competition and inclusion in top Canadian anthologies such as The Journey Prize Anthology and Coming Attractions. She is the author of Home Fires [1997]. [Harbour Publishing, 2002]


Home fires can be cozy - and they can be magnetic, volatile and dangerous. As her follow up to Travellin In in 1990, award winning Prince Rupert short story writer Jean Rysstad has produced another north coast collection, Home Fires (Harbour $16.95), mostly concerned with family relations. Rysstad has also written several radio plays for CBC's Morningside.