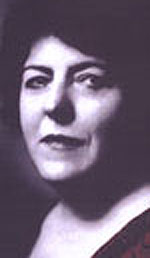 
Constance Lindsay Skinner is the earliest born-in-B.C. woman to write a novel. In 1911, Skinner was also described in the Vancouver Province as 'Vancouver's First Playwright'.

Born near Quesnel, B.C. in 1877, or 1879, where her father might have worked for the Hudson's Bay Company, Constance Lindsay Skinner moved with her parents to Vancouver at age 14. She began writing in her teens. She left Vancouver in 1893 to live with her aunt in California. She worked as a journalist in Los Angeles and Chicago before moving to New York City in 1912. She remained a professional writer for the next 27 years, reviewing books, operas, symphonies and plays for various publications, mostly the New York Herald Tribune, and writing original works in various genres. Much of her fiction, in which she frequently portrayed Indians, settlers and fur traders, was set in the Pacific Northwest. A play of hers called Good Morning, Rosamond! opened on Broadway in 1917, based on a novel of the same name. She co-wrote a play called The Lady of the Gray Gables with Herbert Heron. Her award-winning collection of 'Indian poems' was The Song of the Coast Dwellers.

Some of Skinner's other better-known works include Embers of Race, The Golden Klondike and How to Reach It, The Literature of the Polar Expedition, No Tomorrow With Friends, Red Willow, Rob Roy, and Pioneers of the Old Southwest: A Chronicle of the Dark and Bloody Ground. Her non-fiction work included Adventurers of Oregon: A Chronicle of the Fur Trade. Skinner also edited The Rivers of America, a series of historical books that was not finished by the time she died in New York City in 1939.

Among Skinner's literary colleagues was Jack London. She never married. Jean Barman reconstructed her life from her papers at the New York City Library for a critical biography, Constance Lindsay Skinner: Writing on the Frontier (UTP 2002). In May of 2003 at the Jericho Arts Centre, the Vital Spark Theatre and the United Players of Vancouver presented one of Skinner's most successful and controversial plays, Birthright, which premiered in Chicago in 1912.

Review of the author's work by BC Studies:
Birthright