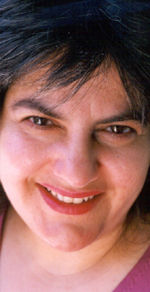 
Carol Ann Sokoloff is a singer-songwriter who co-manages Ekstasis Editions, a literary publishing house, with her partner Richard Olafson. Born in Toronto on April 24, 1951, she has been a writer, producer and broadcaster for CBC Radio and the Artistic Director of Oasis Egyptian Dance Ensemble. Her sisters in Toronto, Noreen Tomlinson Taylor and Sharon Harris, are both artists, the former a painter, the latter a photographer. Sokoloff received her B.A. Honours in English from University of Toronto in 1974. She conducted graduate work as a Chaucer specialist in Medieval Studies and has studied Drama at the University of Manchester. In 1986 she came to Victoria where she is the Victoria representative of the International Sufi Movement.

Sokoloff has frequently visited Lake O'Hara in the Rocky Mountains, behind Lake Louise. These visits gave rise to Eternal Lake O'Hara, a blend of poetry, archival photos and history. The book recalls the mountaineering rivalry of two Yale-educated explorers, S.E.S. Allen and W.D. Wilcox, who were companions on expeditions in 1893 and 1894. Allen's wealthy father refused to publish his map of the area that was completed prior to Wilcox's map. Allen had a nervous breakdown and was confined for the rest of his life due to schizophrenia. Wilcox successfully published his account of the area, never crediting any of Allen's contributions. A painting of Lake O'Hara by Group of Seven painter J.E.H. MacDonald decorates the cover.

Articles: 1 Article for this author
Colours Everywhere You Go!
Info


The rhyming exploration of colour in Colours Everywhere You Go! (Ekstasis $10.95) is a culmination of Carol Ann Sokoloff's many interests as a poet, performer, songwriter, editor, literacy advocate and Peabody Award for Educational Radio winner. Shawnigan Lake illustrator Tineke Visser translates "a little orange, a little indigo"; into a rainbow journey through a colourful world.