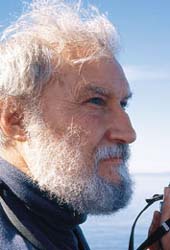 
David A.E. Spalding was born in Sheffield, England on June 23, 1937 and he arrived in Canada in 1967. A whale expert, he first came to British Columbia from Alberta in 1990. He grew up in England where his first cetacean experience was in the form of whale steak. He went to work in a museum at a historic whaling port and then held senior positions at the Provincial Museum of Alberta for 15 years. He has a degree in natural sciences and has been an adviser for the Royal Tyrrell Museum of Paleontology. In Alberta he also formed a folk duo called Brandywine with his wife and frequent co-writer Andrea Spalding. They came to live on Pender Island in 1990, where they have operated Arbutus Retreat Bed and Breakfast. Spalding is author, co-author or editor of numerous non-fiction books, as well as many articles and scripts for radio and television.

AWARDS: Ministry of Education Award (Japan) and Best of the West (California) for radio program.

Review of the author's work by BC Studies:
Whales of the West Coast

Articles: 1 Article for this author
The Silver Boulder (Whitecap $3.95)
Article


Since relocating to Pender Island from Alberta, Andrea Spalding and David Spalding have quickly become the most prolific literary couple in B.C., working individually and as a team.

The Spaldings are releasing their second installment of an educational 'adventure net' series for ages 8 to 12, The Silver Boulder (Whitecap $3.95). While searching for silver around Kaslo, Rick and Willow Forster visit the ghost town of Sandon and the sternwheeler SS Moyie.