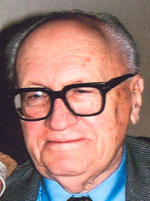 
Wladyslaw J. Stankiewicz was born in Warsaw, Poland, in 1922. Educated in Poland, Scotland (University of St. Andrews) and England (London School of Economics and Political Science), he was Post-Doctoral Fellow at the Center of International Studies at Princeton University. He fought against Germany during the Second World War with the Polish Army-in-Exile in France (1940) and as an officer in the 1st Polish Armoured Division for the British in the 1944-1945 Allied campaigns in France, Belgium, Holland and Germany, then with the 2nd Polish Corps in Italy. He began teaching at UBC in 1957 and lectured at more than 50 universities around the world. Several of his approximately 20 books have been translated into other languages. Married to Marketa Goetz-Stankiewicz, he died in Vancouver General Hospital on July 21, 2006.

In Search of a Political Philosophy: Ideologies at the Close of the Twentieth Century (Routledge, London & New York, 1993)

The Essential Stankiewicz: On the Importance of Political Theory (Ronsdale Press, Vancouver, B.C., 2001)

Crisis in British Government: the Need for Reform (Collier-MacMillan, London, 1967)

British Government in an Era of Reform (Collier-MacMillan, London, 1976)

What is Behavioralism? Thoughts on the Crisis in the Social Sciences (Girs Press, West Chesterfield, N.H., 1971)


Edited by Samuel V. LaSelva and Bogdan Czaykowski, Holding One's Time in Thought: The Political Philosophy of W.J. Stankiewicz (Ronsdale) contains essays from a 1995 UBC colloquium honouring political scientist and aphorist W.J. Stankiewicz who taught Political Science at UBC for 30 years. He published more than a dozen books and lectured at 60 universities on five continents.