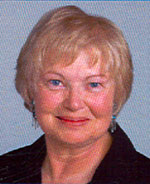 
Lynne Stonier-Newman was born in Quesnel in 1941, where her father Gordon Nicol was the first BCPP highway patrolman in the Quesnel district from 1939 to 1941. He later served as mayor of Kamloops from 1970 to 1972. She lives north of Kamloops, at Little Heffley Lake, where she has worked as a technical writer, marketing consultant and history buff whose articles, fiction and poetry have been published in a variety of periodicals.

She is the author of Policing a Pioneer Province: The BC Provincial Police 1858-1950 (Harbour, 1991) and a follow-up study of BCPPP policeman Frederick Hussey, The Lawman (Heritage 2006), in the form of a novel. She describes her subject as "superintendent for two decades in an era when the non-Native population of British Columbia ballooned from less than 50,000 to more than 300,000, and people switched from using horses and carriages to automobiles."

In a similar vein to her preceding B.C. historical novel The Lawman, Lynne Stonier-Newman has provided the first biography of the man who served as gold commissioner of B.C. during the height of the Fraser River Gold Rush. Peter O'Reilly: The Rise of a Reluctant Immigrant (Touchwood $19.95) also outlines the Irishman's multi-faceted career as a county court judge, assistant land commissioner and federally appointed BC Indian Reserve Lands commissioner from 1880 to 1898. Nicknamed The Judge by his friends who included Sir Matthew Baillie Begbie and Edward Dewdney, O'Reilly lived at Point Ellice House in Victoria.

She has also published an illustrated poetry chapbook and an audio book entitled The Whys of a Women, with Jackie Stonier, a collection of 65 first-person stories that highlight how mature Canadian women perceive themselves. It was derived from five-page questionnaire that was circulated to 200 English-speaking Canadian women in 1999. Her poetry chapbook is Canadian-Eh?

Review of the author's work by BC Studies:
Peter O'Reilly: The Rise of a Reluctant Immigrant

The Lawman: Adventures of a Frontier Diplomat (Heritage 2006).

Articles: 1 Article for this author
The Lawman
Review (2006)

When "gentleman bandit"; Bill Miner held up CPR No. 97 near Kamloops on May 8, 1906, his gang of three netted only $15 for their efforts-because they robbed the wrong train. After a five-day manhunt, Bill Miner and his two colleagues were captured near Douglas Lake and brought to Kamloops in handcuffs.

As Lynne Stonier-Newman describes in The Lawman: Adventures of a Frontier Diplomat (Touchwood $19.95), a creative non-fiction history of Provincial Police Superintendent Fred Hussey, the ensuing trial revealed B.C.'s most famous crook-who spent most of his adult life in prisons-had left some crucial evidence at the scene of the crime.

Having robbed the wrong train, Miner managed to leave a leather belt on the tracks near a parcel of dynamite. Hussey cagily asked the alleged culprits to "identify who owned what from a pile of their revolvers, belts and other effects."; When Miner picked up the belt that had been lying on the tracks at the robbery site, Hussey knew he had his man.

Hussey had risen through the ranks, patrolling on horseback, stage coach, train, paddlewheeler and sleigh. "He was a good listener and honest,"; says Stonier-Newman. "There was no hint of dipping a hand in any pot. There was a lot of that around in those days.";

Fred Hussey had built his reputation as a straight shooter who loved a good horse race, especially if he was on the winning mount. Stonier-Newman decided to imagine his life for The Lawman after she interviewed some 50 former policemen for Policing A Pioneer Province and heard many of them refer to Hussey as a legendary figure.


Drawing on archival material that includes letters and scrapbooks, Stonier-Newman reveals how a peacekeeper's job could be complicated in the rough and tumble of the 1890s. New mines, canneries and logging operations were attracting men by the thousands.

When Hussey took charge of the Provincials in 1891, there were fewer than 50,000 non-natives in B.C. Twenty years later the population had mushroomed to 300,000. The "Provincials"; were placed in the busiest regions to anticipate problems before they happened. In Hussey's day, laying charges meant you weren't doing your job.

With some prodding from Hussey, a modern police act was passed in 1904 and its contents were distilled in practical leather bound handbooks that were to be carried by Provincials at all times. "As the superintendent, Hussey liked orders to have simple, explicit wording. He wanted the 1904 Police Act to be an instruction manual, informing a constable of what was expected of him and how he was to manage in all circumstances.";

As a superintendent in Victoria, Hussey spent much of his time trying to secure resources for his "lads"; who were scattered around the province. This meant going toe-to-toe with attorneys-general who were usually members of short-lived governments. Much of Hussey's tenure pre-dated clearly defined party politics and the more stable governments that followed.

At various times, as the province teetered on bankruptcy, Hussey and his men endured post-colonial variations of "restraint."; At one point policemen were forced to pay for their own horse's feed while on duty, resulting in a lot of horse sales and demoralized constables.

According to Stonier-Newman, Hussey preferred to be in the field, working with his Provincials, where he developed strong relationships with native leaders and showed "respect and compassion for the Kootenay miners."; She credits his superior listening skills for keeping peace in the mines.

When the Provincials weren't busy dealing with smallpox outbreaks, bootleggers, opium smugglers, domestic violence and murders, overt racism whipped up a volatile environment. "Chinese and Japanese were to be kept not only out of the mines but also out of any work undertaken by permission of the B.C. government,"; says Stonier-Newman. "That included all new railways, roads, logging, real estate development and construction.";

At age 47, Hussey married a young nurse named Nell Good who declared she would continue to work part time-something shockingly to 19th century British sensibilities-but Hussey grew to understand and like it. Stonier-Newman imagines their lives together in rapidly expanding Victoria where their paths crossed with the elderly Judge Matthew Begbie.

Upon Hussey's death from cancer at age 59, the Victoria Colonist recalled, "He was kind, broad-minded, thoughtful of others... always fair, always the soul of honour and justice, a big kindly, brave, manly man.";

Although the dialogue in The Lawman can be stilted and characters need more subtlety, it's a compelling picture of a frontier province feeling its oats. The Provincials were eventually merged with the RCMP in 1950. 1-894898-39-7