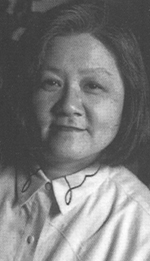 
Saeko Usukawa, who was an editorial director at Douglas & McIntyre for almost 30 years, died on July 5, 2009 at age 63. At D&M, Usukawa edited many important Canadian books by authors such as Wayson Choy, Sky LEE, Douglas Coupland and Hilary Stewart. In 2007, Saeko received the Tom Fairley Award for Editorial Excellence for her work on Abstract Painting in Canada by Roald Nasgaard.

Usukawa also edited Sound Heritage: Voices from British Columbia (Douglas & McIntyre, 1984), a compilation of excerpts from the series of books produced by the Sound Heritage program in Victoria, and she co-authored Tales in the Saddle: Great Lines from Classic Westerns (Greystone, 1997) with filmmaker Peggy Thompson, also her partner for thirty years. They also collaborated to produce Hard-Boiled: Great Lines from Classic Noir Films (Chronicle Books, 1995).

Review of the author's work by BC Studies:
Sound Heritage: Voices from British Columbia


A west coast editor who helped an east coast author shape a book with national significance has been honoured by the Editors' Association of Canada/Association canadienne des réviseurs.

From a short list of four candidates, Saeko Usukawa was chosen to receive the 2007 Tom Fairley Award for Editorial Excellence for her contribution to Abstract Painting in Canada by Roald Nasgaard (Douglas & McIntyre Publishing Group). Saeko accepted the $2,000 award at the association's annual banquet, held June 7 in Edmonton's historic Fairmont Hotel Macdonald.

Said one of the judges, "Saeko took an enormous manuscript that had to be shortened drastically and helped the author produce a smoothly flowing, authoritative reference." How big is "enormous"? The initial manuscript was 190,000 words, and Saeko pruned it to 155,000. (You do the math.)

Even in its softcover edition, released earlier this year, the book weighs almost five pounds. The page count is 432, and the large-format work includes 200 images. (Interestingly, the number of images reproduced increased from the 175 originally specified-thanks in large part to Saeko, who advocated for more on behalf of the author.)

One more statistic of note that astounded even the book's editor: 901 endnotes!

"I think that's a record for me," said Saeko with a chuckle. "And they weren't all Ibids either!"

Saeko brought a wealth of experience to this freelance project from her long career at Vancouver-based Douglas & McIntyre, where she was on the staff for 25 years. (She was editorial director when she took early retirement in 2006.)

During that time she edited more than 25 books about art and architecture (gaining much knowledge in the process), not to mention many illustrated titles and also works of fiction. Well-known authors she has worked with include Wayson Choy, Douglas Coupland, Sky Lee, Gwendolyn MacEwen, Bill Richardson and George Woodcock.

Ever self-effacing, Saeko says of her work on illustrated books: "I just really like putting all the pieces together." What made this particular project a challenge-aside from the book's sheer size, scope and amount of detail-was the tight timeline. Saeko did the substantive editing and stylistic/copy editing as well as all of the book's fact-checking over six months.

Not only that, she helped organize and select images and liaised with the book's designer, mostly at a distance. "I think I only ever had one face-to-face with the designer," she said. And she has yet to meet the author in person.

One of her chief goals in the editing was to make the text-written by a professor of art history at Florida State University-accessible to a more general audience. Positive reviews and appreciative comments from the Tom Fairley Award judges affirm that she was successful in this aim. One judge called the historical survey "a polished, cohesive and intellectually fulfilling book ... a feast for the mind as well as the eye, a work of patience and focus."

Saeko's attention to Abstract Painting in Canada is even more admirable when you learn that she was simultaneously working on another illustrated book on almost the same schedule. Recording Their Story, a biography of ethnographer James Teit, by Judy Thompson, won the top B.C. Historical Federation award in early May as well as recognition for its design from the Alcuin Society (Peter Cocking, designer).