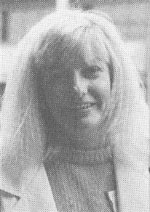 
Also known as Tina Vasilos and Freda Vasilos, Freda Vasilopoulos is a Dutch-born writer who married a Greek Canadian. Most of her early books were set in Greece, a country she knows very well from her many visits there and her familiarity with the Greek community in British Columbia. "I was tired of the way romance novels presented Greeks as macho guys with the women walking two steps behind them," she said. "Most Greek women I know wouldn't stand for that so I decided to write about real human beings who were Greek." As a writer in Clearbrook, B.C., she heard about a Vancouver romance agent back in 1982 and wrote to her saying she had several manuscripts stashed away. This agent (no longer in the business) liked one but thought she should revise the first two chapters. That manuscript was later published by Silhouette as Moon Madness by Freda Vasilos. Vasilopoulos stopped writing fiction in the late 1990s.


WHO READS ROMANCE NOVELS? Hardly anybody, if you ask them. Nearly everyone, if you look at the figures. According to a 1988 U.S. Gallup report, 15 per cent of all fiction sold is romance. Reported revenues for one company, Harlequin, jumped from $3 million in 1970 to $345 million in 1987.

Harlequin Books, based in Don Mills, Ontario, publishes in 21 languages und sells in 100 countries. As the granddaddy of paperback romance houses, it accounts for most of the romance novels published. Harlequin was started by the Bonnycastie family of Winnipeg as a reprint house (which published, among others, Agatha Christie and Somerset Maugham) and is now owned by media giant Torstar. Torstar, owner of the Toronto Star, recently bought most of its competition in the romance field: Mills & Boon in London and Silhouette Books (which was started by Simon & Schuster in the early 1970's).

Industry statistics show that most readers of romance are women, most are between 25 and 49, and almost half have some college education. Half are employed and in that group three-quarters are employed fulltime. Thirty per cent of romance readers have an average family income of $30,000 or more, The average reader spends $3O a month on her favourite authors.

So what do these women want? Well, contrary to what most people who've never, read a romance think, today's heroine is not the lustreless orphaned governess swept away by a dark arrogant hero with muscular thighs in some exotic locale, as in the romances popularized by Barbara Cartland-style novels in the 1960's.

Today's heroine has strong traditional values (ie. marriage), not to be confused with strong old-fashioned values. Today's heroine is generally a strong, independent woman, with a career and a mind of her own. Like the women who create them.