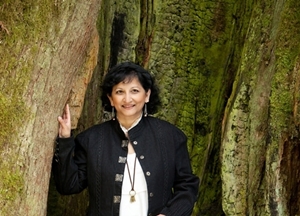 
Shereen Vedam is possibly the only B.C. author who was born in Ceylon, later renamed Sri Lanka. She came to Canada in the early 1970s, eventually relocating to Vancouver Island. As an avid reader of fantasy and romance novels, she is self-described as "a fan of resourceful women, intriguing men, and happily ever after endings." She remains fond of reading authors that include Andre Norton, Anne McCaffrey, Terry Brooks, Martha Wells, Terry Pratchett and Hilari Bell.

A Devilish Slumber is her first novel in a fairytale-inspired trilogy or "historical paranormal romance series" set in London, England, in the year 1813. A troubled heroine must undertake an extraordinary journey to clear her name and protect those she cares for. It mixes humour, fantasy, romance and history.

A Devlish Slumber accompanies other Regency Historical Romance novels, A Beastly Scandal (2013), A Scorching Dilemma (2015) and A Perfect Curse (2015). Her writing has also appeared in various anthologies and in shorter works.