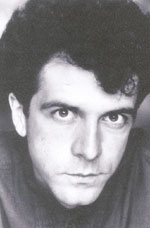 
"I'm a hyphenated person--I live between the cultures."

Born in Buenos Aires, Argentina on December 7, 1962, Guillermo Verdecchia grew up in Ontario since 1967 and first moved to Vancouver in September of 1991. He rose to prominence as a playrwright, director and actor his one-man play Fronteras Americanas. At age 30 he received the Governor General's Award for Drama and a Chalmers Canadian Play Award for the Fronteras Americanas - American Borders (Talonbooks, 1997) about a Latin American struggling with misconceptions, stereotypes and myths. As Crucero/Crossroads, it has been adapted for film and has played at festivals around the world. With Daniel Brooks, he is the co-author of The Noam Chomsky Lectures (1991) which received a Chalmers Canadian Play Award and was shortlisted for the Governor General's Award. With Marcus Youssef he co-wrote A Line in the Sand, winner of the Chalmers Best New Play award in 1997. His first collection of short stories, Citizen SuÃ rez, was published by Talonbooks in 1998. He has also published Insomnia (Scirocco, 1999) with Daniel Brooks and The Adventures of Ali & Ali and the aXes of Evil (Talonbooks, 2005, $16.95) with Marcus Youssef and Camyar Chai, a potent satire on politically correct commentary and western ignorance in the George Bush II era.

Two plays are contained in Another Country / bloom (Talonbooks, 2007). Originally titled Final Decisions [War], Verdecchia's first play, Another Country, was his response to his home country Argentina's Dirty War in 1976-83. He cites the complicity of the U.S. in the junta's war against subversives via the auspices of the public relations firm of Burson-Marsteller. His recent play called bloom is replete with images form T.S. Eliot's The Waste Land. It critically examines the American government's so-called War on Terror.