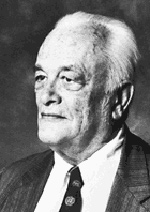 
Perhaps the only Nobel Prize winner of the 20th century to be born in British Columbia was economist William S. Vickrey who was born in Victoria in 1914. His family soon left the province and he did not return. He received the Nobel Prize for Economics in 1996.


William Vickrey's elementary and secondary education were in Europe and the United States, with graduation from Phillips Andover Academy in 1931. He received a B.S. in mathematics from Yale in 1935, followed by graduate work in economics at Columbia University from 1935 to 1937, when he received the M.A. degree. He then worked for the National Resources Planning Board in Washington and the Division of Tax Research in the U.S. Treasury Department.

A conscientious objector during World War II, he spent part of his alternate service designing a new inheritance tax for Puerto Rico. Columbia University awarded him the Ph.D. in economics in 1948. His doctoral dissertation, Agenda for Progressive Taxation, was reprinted as an "economic classic" in 1972.

In 1946 he began his teaching career at Columbia University as a lecturer in economics. He became a full professor in 1958 and was named McVickar Professor of Political Economy in 1971. He was chairman of the Department of Economics from 1964 to 1967 and retired as McVickar Professor Emeritus in 1982.

A long career of research covered a large range of subjects. The first of many involving efficient pricing of public utilities done in 1939 and 1940 for the Twentieth Century Fund dealt with electric power. In 1951, he studied transit fares in New York City for The Mayor's Committee on Management Survey. He was a member of the 1950 Shoup mission that developed a comprehensive program for revising the tax system of Japan. He lectured widely and served as a consultant in the United States and overseas and to the United Nations.

He was elected to the National Academy of Sciences and in 1992 served as president of the American Economic Association. He was a Fellow of the Econometric Society and received an honorary degree from the University of Chicago in 1979.

He was a founding member of Taxation, Resources, and Economic Development and was a member of many professional and civic organizations and an active supporter of organizations promoting world peace. He belonged to The Religious Society of Friends.

He was married to Cecile Thompson in 1951. They lived in Hastings-on-Hudson in New York. He died in October 1996.