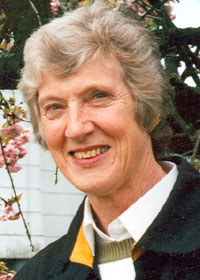 
One of the most integral members of the B.C. Historical Society, Anne Yandle, a pillar of the B.C. community for more than fifty years, died of cancer at the Marion Hospice in Vancouver on December 12, 2006. "With her passing,"; says Basil Stuart-Stubbs, former Head UBC Librarian, "even those who knew her best are beginning to discover the astonishing breadth of Anne's interests and activities, and the extent of her contributions to our book community locally, provincially and nationally. Friend and mentor to a multitude, unique and irreplaceable, she was a gem with a thousand facets.";

She was predeceased in 1978 by Philip Yandle who had served as the founding editor of the B.C. Historical News. In 2004, Anne Yandle provided a brief history of the BC Historical Federation's publication, in preparation for its name change to British Columbia History, typically opting not to acknowledge her own extensive role. Anne Yandle remained very active in BC Historical News for almost forty years and served as the book reviews editor until the year in which she died. Her extensive private collection of books has been donated to the University of British Columbia. In 2007, the BC Historical Federation renamed its Best Article Award (of the year) Award in honour of Anne and Philip Yandle, co-founders of the B.C. Historical News.

Anne McMaster (Carson) Yandle was born as Anne Carson near Ballymoney, Northern Ireland, on December 29, 1930. Growing up on a family farm with her two brothers, she learned to read at age four on the knee of her grandfather Carson. After she attended Alexandra College, Dublin and then Trinity College, where she graduated with BA and BCom degrees, she worked in Belfast until 1957. She and a school friend immigrated to Winnipeg, then she continued west to Vancouver. She worked as a library assistant for the Vancouver Public Library before leaving to attend McGill University's School of Library Science in 1960. Following her graduation with a BLS degree in 1961, she and three of her classmates were hired by the University of British Columbia Library. She married Philip A. Yandle in 1965.

According to Frances Woodward, "Anne Yandle worked in the Special Collections Division, where Basil Stuart-Stubbs confidently left her in charge when he became University Librarian. She became responsible for the development of its many fine collections, including British Columbia and Canadian history, early children's literature, and for encouraging her colleagues to build the manuscript collections, University Archives, and the historical maps and cartographic archives. She was one of the first librarians to see the value of ephemera and alternative literature while establishing ongoing working relationships with leading book dealers around the world, as well as antiquarian and new book dealers in British Columbia.

"On her sabbatical year, she spent six months working with dealers in England, and six months at the Alexander Turnbull Library in Wellington, New Zealand. She was one of the founding members of the Special Collections Interest Group of the Canadian Library Association, and served as President of the Council of the Bibliographical Society of Canada. Well-known in the Irish community in Vancouver, she frequently provided a home-away-from-home for visitors and new residents. When it became known that a special reproduction of the Book of Kells was to be undertaken, the Irish in Vancouver gathered money to buy a copy for Special Collections, and had a special stand built to display the book.

"When she took early retirement in December, 1991, many people from the Library, SLAIS, the Irish community in Vancouver, book dealers and others from off-campus were in attendance. She was active in her retirement in the Alcuin Society, the Bibliographical Society of Canada, the Historical Federation of British Columbia and the Friends of Simon Fraser University Library.";

Anne Yandle also operated her own antiquarian and travel book business, Marco Polo Books, which she co-founded in 1989. She maintained an extensive inventory of both common and hard-to-find titles in the basement of her home. For many years she worked on compiling an extensive list of all fiction from British Columbia, a largely thankless task, and was hoping to see it published for public benefit. "What a loss her death is for BC libraries,"; said Paul Whitney, head of the Vancouver Public Library. "She was a genius at ferreting out valuable B.C. local histories which exist outside the mainstream of book distribution. Academic and public library collections are more inclusive and richer as a result of her efforts. I am also reminded that she made an excellent marmalade.";

-- With thanks to Frances Woodward


YANDLE _ Anne McMaster Carson died in the early hours of December 12th, 2006 at the Marion Hospice, Vancouver. She bore a short and devastating battle with cancer bravely and uncomplainingly, surrounded by an outpouring of help and concern from her family and friends. Anne was born on December 29th, 1930 near Ballymoney in Northern Ireland. She grew up on the family farm with her older brother, Robert, and younger brother David. Anne learned to read aged four at her Grandfather Carson's knee. Her lifelong love of books and nature began there at home in the Irish countryside. After school she attended Alexandra College, Dublin and then Trinity College where she graduated with BA and BCom degrees. She worked in Belfast until 1957 when she and a school friend emigrated to Winnipeg. Shortly afterwards she moved to Vancouver, where she spent the rest of her life. Anne fenced, country-danced and worked at the Public Library until she enrolled in 1960 at McGill University's School of Library Science, obtaining her BLS degree the following year. Anne and three classmates accepted jobs on the Coast. The Special Collections Division of the UBC Library was fortunate to add Anne to its staff and she quickly rose to Division Head. In 1965 she married Philip Yandle, a long time admirer. Anne and Phil enjoyed a warm and loving relationship, mutually supportive, travelling widely in the Province and abroad. With Phil's early death in 1978, Anne focussed her considerable energies the expansion of Special Collections, tending to the needs of students, faculty and numerous visiting scholars. Her Division provided a wonderful resource for local history and West Coast exploration, and archival material in many areas. After early retirement in 1991, Anne concentrated on Marco Polo Books, a travel book business which she had co-founded in 1989. Catalogues were collated and dispatched to a growing number of customers. Anne and her business partner were working on the latest catalogue in the fall but, alas, Anne's energies were too low to complete it. Her personal interests were wide: travel, music, gardening, nature, book clubs. Her home was open to family, friends and visitors of all kinds - so much so it was described as Anne's B & B. Her great gift was for friendship with people of all ages and all walks of life. Much loved, much mourned, Anne Yandle was the salt of the earth and like salt, we miss her. A gathering to honour Anne will be held in the near future.


"At the annual general meeting of the British Columbia Historical Association in 1967 in Williams Lake, the President, Donald New, spoke pessimistically about the future of the Association without the British Columbia Historical Quarterly. The most recent issue, dated 1957, had been published in 1962, and although the Editor, Willard Ireland, promised further issues, none had appeared. Meanwhile, the Association had published several short newsletters in an attempt to keep its members informed and committed; three issues appeared between 1965 and 1966, edited in turn by Donald New (Gulf Islands), Robin Brammall (Vancouver) and Bessie Choate (Burnaby). At that 1967 meeting, there seemed little hope of further issues of the Quarterly; the fledgling newsletter also appeared to be moribund. The President, in the absence of nominations, pleaded for an editor. Philip Yandle, unknown to most BCHA members, eventually volunteered and in spring 1968 the first issue of The British Columbia Historical News came out. In it, the new editor promised that "to the best of my ability and with the help of the member societies I will in each issue publish their accomplishments and items of interest."; His aim was to bring together the flagging member societies, and disclose fully the activities of the Association to its members. Volumes 1-10, accordingly, published minutes of all BCHA meetings, along with news of member societies, news of local historical interest, and a feature article in each issue. Robert Genn, well-known BC artist, generously provided drawings for the covers of Volumes 2-10. Book reviews first appeared in Volume 2. Frances Woodward provided a "British Columbia Books of Interest"; column in Volumes 4 -14. The first ten volumes of the News were typed on stencils on a portable Olivetti typewriter, later on an IBM Selectric, and run off on a second-hand Gestetner. Distribution of the News at that time was by mailing batches of copies to member societies; many such packages were delivered personally by John Spittle, whose business took him throughout the province. After Phil Yandle stepped down in 1977 at the end of Volume 10, Volume 11:1-2 were produced by an editorial committee of the Vancouver Historical Society. Kent Haworth and Patricia Roy from Victoria took over and carried on, along with Terry Eastwood, until the end of Volume 12. Maureen Cassidy, Marie Elliott and Bob Tyrrell in turn produced about two volumes each; Esther Birney edited Volume 19:3. Naomi Miller moved from the President's chair to that of Editor in 1988 (Volume 21), continuing until 1999, when Fred Braches succeeded her; he handed the job over to John Atkin in 2003. Over the years the contents of the News have been reorganized by the various editors. Minutes are no longer published, more feature articles have been included, and new columns such as notes on archives and websites have been added. The News, as the successor to the British Columbia Historical Quarterly, carried on the philosophy expressed by Robin Brammall in his 1972 presidential address, when he said that the Quarterly "was the life blood of the Association and there is some doubt as to whether our Association [has] any real vitality or raison d'être without [it]"; (BCHN, Volume 9:1).";