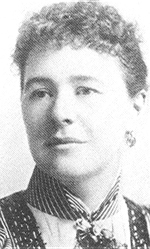 Now restored as a high-end restaurant, Guisachan House was built as a summer home for the Earl and Countess of Aberdeen in 1891, drawing its name ("Land of the Firs:) from a family estate in Inverness-shire Scotland. The property was designated as a park in 1986, resulting the restoration of the original house that was designed in the style of an Indian colonial bungalow. A feminist before her time, Lady Aberdeen was featured as an author at the 1892-1893 Chicago Exposition having written articles about her travels in Canada, particularly in the west, describing her Okanagan farm in the pages of Onward and Upward magazine. These articles were republished in book form as Through Canada With A Kodak (Edinburgh: W.H. White & Company, 1893).

ENTRY: Lady Aberdeen, born Ishbel Maria Majoribanks, married her husband, Scottish-born John Campbell Gordon, in 1877. Lord Aberdeen became Governor General of Canada on May 22, 1893. They had made an extensive trip to Canada as part of a world tour in 1890. Feeling an immediate affinity for Canada, they bought a ranch near Coldstream in the Okanagan Valley in 1891. The purchase was touted in local newspapers as "the best advertisement the Okanagan country has ever had."

Managed by her brother, the ranch was named Guisachan after Lady Aberdeen's father's estate at Guisachan, near Inverness-shire in Scotland, and reputedly became the site of the first large-scale planting of fruit trees and hops in the Okanagan valley. Equally significant, the Aberdeens encouraged many of their English and Scottish countrymen to settle in the Okanagan. In her later memoir entitled We Twa: Reminiscenses of Lord and Lady Aberdeen, Lady Aberdeen describes visiting the Okanagan.

John Campbell Gordon was Canada's seventh Governor-General, from 1893 to 1898. The couple travelled extensively during his term at Rideau Hall, visiting Dr. Alexander Graham Bell and First Nations people, supporting sports and presiding over celebrations for Queen Victoria's Diamond Jubilee. They also provided a letter of introduction to Pauline Johnson when she went to read her poetry in London, England. Lady Aberdeen became first president of the International Council of Women and helped create the Victorian Order of Nurses in 1897. He served in the House of Lords, favouring Prime Minister Gladstone, and was appointed Lord Lieutenant of Ireland in 1886 prior to his role as the Queen's representative in Canada. He returned to his role as Lord Lieutenant of Ireland after the couple left office in Canada. Lord Aberdeen died in 1934; she died in 1939.

Veronica Strong-Boag, as a UBC professor in the Departments of Education and Women's Studies, has examined the 'the Aberdeens' passion for social reform and their contributions to Canada in Liberal Hearts and Coronets (University of Toronto Press, 2015). It is described as "the first biography to treat John Campbell Gordon as seriously as his better-known wife." While they worked as a couple to improve workers' rights, women's rights and home health care, Ishbel helped found, and was elected president of, Canada's first National Council of Women and the Victorian Order of Nurses. Through their beliefs and actions, according to Strong-Boag, the Aberdeens transformed the perception of Canada's Governor General.

We Twa: Reminiscenses of Lord and Lady Aberdeen, Volumes I and II (Glasgow: William Collins, 1925)

The Journal of Lady Aberdeen: The Okanagan Valley in the Nineties (Victoria: Morriss Publishing, 1986). Edited by R.M. Middleton.

Ishbel and Empire: A Biography of Lady Aberdeen (Dundurn, 1996) by Doris French Shackleton

Articles: 1 Article for this author
A marriage re-examined


John Campbell Gordon was Canada's seventh Governor-General, from 1893 to 1898. Originally from Scotland, he and his wife Ishbel Marjoribanks Gordon, collectively known as 'the Aberdeens,' were known for their passion for social reform. Liberal Hearts and Coronets (University of Toronto Press, 2015) by Veronica Strong-Boag explores the compelling story of the progressive Aberdeens and their contributions to Canada. It is also "the first biography to treat john Campbell Gordon as seriously as his better-known wife."; The couple's first visit to the country was part of a world tour undertaken in 1890. They immediately felt an affinity with Canada and in 1891 bought Coldstream Ranch in BC's Okanagan valley (the purchase was reportedly touted in local newspapers as "the best advertisement the Okanagan country has ever had";). In 1893 John was appointed Canada's Governor-General and the Aberdeens settled in at Ottawa's Rideau Hall. The couple was dedicated to worker's rights, women's rights and home health care. Ishbel helped found and was elected president of Canada's first National Council of Woman and the Victorian Order of Nurses. John travelled extensively through Canada, driven to meet and speak with the everyday Canadian. Through their beliefs and actions, the Aberdeens transformed the perception of Canada's Governor General. Previously viewed as an upper-crust representative of the monarchy, the position was now seen as one that listened to and spoke of Canadian citizens' concerns. Veronica Strong-Boag, a UBC professor in the Departments of Education and Women's Studies, is a former Director of the Centre for Research in Women's Studies and Gender Relations and a former coordinator of women's studies programming at SFU.