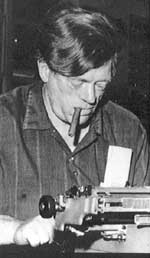 Often cited as one of the co-founders of the Georgia Straight, Milton Acorn organized readings at the Advance Mattress Coffee, a hub for both literature and political activism in the late 1960s. According to Richard Lemm in his 1996 biography of Acorn: "Named after the former tenant in this warehouse, the coffee-house became Acorn's West Coast version of the Bohemian Embassy. He read, hosted readings, and, of course, hung out, tirelessly talking about politics and poetry."

The Advance Mattress was reputedly infiltrated by undercover police. A younger habitue at the time was Larry Gambone who recalls, "I only went to the Advance Mattress Coffee House a couple of times before the City shut it down, but it made an impression on me as it was the first coffee house where political ideas were tossed around, as the others I had been to were for music and poetry alone. It was a dark and somewhat sinister place and my romantic young mind fantasized about revolutions being plotted by small groups of bearded men and lank haired women wearing black clothing."

"You could go for years without seeing him, and yet he'll always be there somehow, a great craggy presence at the back of your mind, a gnarled tree in silhouette on the horizon." -- Gwendolyn MacEwan

Milton Acorn was reputedly one of the founders of the Georgia Straight newspaper in 1967, before it became a proprietorship under co-founder and owner Dan McLeod. Acorn was at the first organizational meeting on March 30 at which the 'peace paper' was discussed, initially inspired by a party following a Leonard Cohen poetry reading in February. McLeod has acknowledged Acorn's importance in Chris Gudgeon's biography of Acorn called Out of This World. "Milt somehow sold a half-page ad, at a time when we desperately needed the advertising income," McLeod said. "He was very energetic and helpful at the start. Just his presence added legitimacy to what we were doing; he was an important figure and that helped to get people to take us seriously."

One of Acorn's articles appears in the first issue (May 5-18, 1967) of the Georgia Straight when the periodical was part of the underground press movement for the counter-culture. This article defended the Advance Mattress coffeehouse which was having problems with civic officials.

By the early 1960s, Milton Acorn was a modern Pied Piper of poetry. He was an important part of the literary ferment in Kitsilano that was the birth of the modern era of writing and publishing in B.C. He was an inspiration for decidedly non-academic poets such as bill bissett, Red Lane, Patrick Lane, Maxine Gadd, Seymour Mayne, J. Michael Yates, Peter Trower and Al Purdy. He had come to Vancouver in 1963 following the break-up of his marriage to Toronto poet Gwendolyn MacEwan. They had married in 1962. The break-up sent Acorn plummeting in a drunken and almost delirous depression during which he wrote a poem on the wall of the Village Bookstore in Toronto. 'I'm a silence so grim / no sparrow can flutter in / with its small music / nor can a child's innocent rhyme / touch me / where a wish grinds on bone. His rage and paranoia sent him into the psychiatric wing of the Westminster Veterans' Hospital in London, Ontario for seven months. He had already had a stint in Montreal's Ste. Anne De Bellevue Hospital ten years before. Acorn was rejuvenated by the release of two poetry collections that were widely discussed. Fiery again, he rejected praise from George Bowering in The Canadian Forum. "As for the suggestion that I should bring out a book consisting entirely of castrated verse, no Mr. Bowering, I'll not join you or your claque of Establishment fairies. I'm perfectly confident that I can beat you." Acorn caught the train to Vancouver in November of 1963.

In Vancouver, Acorn was also active in the anti-Viet Nam War movement on the West Coast. He returned to eastern Canada in 1969, burdened by drink, and by emotional and physical problems.

Born in Charlottetown, Prince Edward Island on March 30, 1923, Milton Acorn served in the Canadian Armoured Corps, 1939-43 and suffered a serious head injury during World War II. He returned to P.E.I. and worked mainly as a carpenter. In 1956 he self-published his first collection of poetry, In Love and Anger, and went to Montreal where he met other poets such as Irving Layton, Al Purdy, Louis Dudek and Frank Scott. Around this period Acorn fathered a child that was given up for adoption. He also worked as a fireman, freight handler and longshoreman. He was a Marxist who styled himself as the 'people's poet', appearing in coffee houses in the 1950s and 1960s such as The Place, El Cortijo, The Bohemian Embassy, and l'Echourie. The focal point for Acorn was the Bohemian Embassy in Toronto run by Don Cullen and John Robert Colombo. From 1960-62 he co-edited Moment magazine, first with Al Purdy and then with Gwendolyn MacEwan. He was variously a member of the Communist party and the Canadian Liberation Movement, and also a Trotskyite. Eventually he resigned from these formal associations and adopted a fervent left-wing, nationalist stance. When his 1969 collection called I Tasted My Blood did not win the Governor General's Award for Poetry the next year, a group of supportive poets (such as Irving Layton, Eli Mandel, Margaret Atwood, Joe Rosenblatt) met at Grossman's Tavern in Toronto and accorded him the first People's Poet award. The Milton Acorn People's Poet Award continues to be presented. Milton Acorn did receive the Governor General's Award for Poetry in 1975 for The Island Means Minago. In 1976 he co-founded Steel Rail Publishing which published his Jackpine Sonnets a year later. His steadfast companion in later years was Valerie LaPointe. Critic and admirer James Deahl has praised Acorn as "the most accessible literary figure in Canada." Acorn was a formative influence on the West Coast, in Toronto, in Montreal and in the Atlantic Provinces. He died in Charlottetown on August 20, 1986 of heart disease and diabetes. Poems for and about Milton Acorn, called The Northern Red Oak (Unfinished Monument Press, 1987) were published in the following year.

Against a League of Liars. Hawkshead Press, 1960.

I Shout Love and Shaving Off His Beard (poems and prose). Village Book Store Press, 1971.


Your Literary Visitors issue brings to mind my own encounter with a literary presence.

The year was 1967 and we were partying with a group of Israeli university students in their rented Cornwall Avenue bungalow. Suddenly, in the doorway, stood one of the ugliest men I had ever seen. His rugged weather-beaten face looked like it had been cleft by a harsh force of nature from sheer igneous rock. Ragged discoloured teeth, red nosed, a thatch of thick reddish-gray hair, he stood, all six feet of him, inside the doorframe looking us over, wondering perhaps, if he should join us or not. One look at him was enough. If anybody had Genius written all over him with all the word's eccentric implications, it was Milton Acorn.

He joined us on the floor, drank from a bottle of wine, and we began to talk. I can't remember the gist of the conversation. The place was noisey with dancing, drinking, laughing Thank God Its Friday-nighters. I think the topic was poetry. He might have spoke a few lines. Not many weeks later, Irving Layton came to UBC and gave a talk to about 300 students. The bard from Montreal declared that Milton Acorn was "the finest lyric poet in Canada.";

Conversation didn't seem to be Milton's forte. He spoke in expletives, most of them angry denunciations of everything "Booge."; (I didn't know until years later that Milton came from a perfectly respectable bourgeois family back on PEI.) He said he was a Communist. Spent many hours in the Labour Hall in Vancouver. Thought my paintings would fit into the decor there very suitably. I was painting a lot of figures at the time. I invited Milton to read some of his work at the opening of my first exhibition of paintings in the old Vancouver Arts Club on Seymour Street. He came, looking like one of those Tolkien ents, in brown work pants cut off at the knee, his reddish bare legs, gray rumpled work socks and work boots representing some sort of logger-come-street-person. He read The Mighty Elephant Has A Five Pound Brain, standing in the centre of the room, his voice, strangely gentler, much gentler, yet emphatic, than appearance would expect. Polite applause. Later, a couple of "Booge"; men told me the show was fantastic, but the only thing that spoiled it was Milton. He just didn't fit in.

I'd meet Milton in Stanley Park now and then. Once stood him to lunch in the "Booge"; dining room overlooking the rose garden. The effuvia of cigarillos fragrant enough to settle the aura of eccentric more solidly about his work-shirted, somewhat narrow shoulders like motes of dust. People looked. Some smiled. Others frowned. Being with Milton was a self conscious thing. You couldn't help looking around to see who was looking. Sort of like a white woman with a black man in that era of the 40s and 50s when the sight was not as common as it is today.

I didn't know that Milton had a literary reputation in Canada. I hadn't read his poetry. I'd only heard him recite some of it on the street as we walked up Trafalgar in Kitsilano. Or at Kits Beach, his rugged head on my lap. "You're a Booge,"; he told me once, looking up into my face with rheumy eyes, "but you're a nice Booge.";