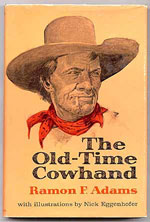 
Western historian and bibliographer Ramon F. Adams wrote and privately printed his first book called Poems of the Canadian West (Vancouver: Evans and Hastings, 1919). It consists primarily of poems about his experiences as a young man in southern Alberta. It's not known how he came to privately publish his first book in Vancouver.

Born at Moscow, Texas on October 3, 1889, Ramon Frederick Adams was 13 when he moved with his family to Sherman, Texas where his father was a jeweller. He entered Austin College in 1905 and became literary editor of the student magazine. After dropping out in 1909, he returned and graduated in 1912. Having studied violin, he joined the faculty of the University of Arkansas in 1912 and married Allie Jarman. They moved to Chicago where he continued to teach until he accepted a job at Wichita Falls College of Music where he also led the local orchestra. After another move to pursue his musical career in Dallas-Fort Worth, he broke his wrist while cranking a Model T Ford, thereby ending his musical hopes. He and his wife opened a candy store in Dallas in 1929.

As a writer, Adams didn't sell his first article to Western Story Magazine until 1923. His first book about western lore was Cowboy Lingo in 1936. As a member of the Texas Institute of Letters, the Presbyterian candy merchant tried to separate myth from reality by travelling extensively, often with the benefit of research and travel grants, frequently interviewing oldtimers. One of his book debunks the various legends surrounding Billy the Kid. His major bibliographies were Six-Guns and Saddle Leather (1954), The Rampaging Herd (1959), Burs [sic] Under the Saddle (1964), The Adams One-Fifty (1976) and More Burrs Under the Saddle (1979). Adams was rewarded for his amateur scholastic diligence with an honorary Doctorate from Austin College in 1968. He died on April 29, 1976 in Dallas.