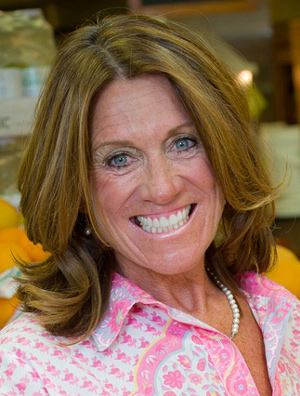 
Shelley and Mike Adams are the former owners of the Whitewater ski hill near Nelson, B.C. There Shelley Adams ran the Fresh Tracks Cafe, having had training and experience as a chef at Whistler and in the film industry. Shelley Adams' first book, Whitewater Cooks: Pure, Simple and Real Creations from the Fresh Tracks Cafe was first self-published and sold 5,000 copies within a year; thereafter she sold the rights to Whitecap Books assuming the book had run its course. That first cookbook hugely benefited from an article in the New York Times after the writer had visited the Adams' Fresh Tracks CafÃ© at the Whitewater Ski Hill and purchased the book.

The Adams sold the ski hill in 2008, enabling her to spend more time on cookbooks. This resulted in her second book, Whitewater Cooks at Home, which she again decided to self-publish. It reputedly sold 6,000 copies in three months since its release in early March of 2009. Whitewater Cooks with Friends was featured on a national TV Show Anna & Kristina's Grocery Bag where they cooked six recipes from the book and gave it a two thumbs up or "Buy" rating. More Magazine featured Shelley Adams in their February 2009 issue, calling her "the chef on skis."

In her cookbook, Whitewater Cooks with Passion (Alicon Holdings/Sandhill), Adams continued to share ambience, flavours, ingredients, conversation, wine, laughter and recipes. After Whitewater Cooks with Passion had been atop the BC Bestsellers list for weeks, her distributor Nancy Wise of Sandhill Books was asked by BC BookWorld to explain the success of Adams' cookbooks in October of 2014.

"At the heart of it all are the recipes themselves," wrote Wise, "and the ultimate power of word-of-mouth. You go out to a friend's place for dinner, who serves a meal based on the Whitewater recipes - and then everyone at the table wants to know where the recipe came from. They become the "go to" cookbooks when people are entertaining. I know some people who have cooked every recipe out of each of the first three books. They swear by them.

"The design of the books are also a factor. There are many beautiful cookbooks out there, but Shelley's include small personal comments from her with most of the recipes. The one I love is her comments under the heading for her banana chocolate icebox cake (in Friends) which reads: An overnight stint in the fridge turns this into a delectable summer picnic cake which travels well by boat. And if, by mistake, the dog steps on it, it's quite easy to smooth over the paw print and garnish it with another pansy!

"I think there's also a lure in her lifestyle - the books are full of photos
showing a lifestyle that some of us might envy. Casual entertaining on the lakeside, beautiful kitchen and gorgeous dishes, elegant dining...of course, all of this is brought to life by the fabulous photography of another Nelsonite, the talented David Glynns."

After Shelley Adams's first self-published cookbook in 2005, Whitewater Cooks: Pure, Simple and Real Creations from the Fresh Tracks CafÃ©, sold out its first print run, she sold her publishing rights to Whitecap Books, generating further success. But she and her husband opted to stick with self-publishing for her second book, Whitewater Cooks At Home, establishing her own imprint. In 2017, cumulative sales for her four Whitewater titles eclipsed 200,000 copies according to publicity materials, leading to her fifth title.