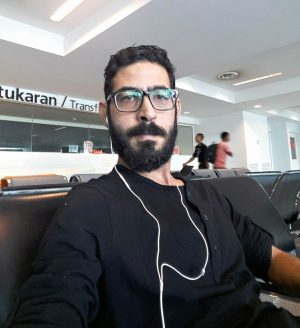 
Hassan Al Kontar was a young Syrian working in the UAE in 2011 when civil war broke out in his home country. Refusing to return for compulsory military service and become a "killing machine," he lived homeless for several years with an expired passport, then was arrested and finally tried to re-establish himself in Malaysia where he thought he could get legal status. Instead, after traveling to Malaysia, he was unable to enter the country or obtain a visa for any other country. Trapped in the arrival zone at Kuala Lumpur International Airport for over six months, Al Kontar turned to social media to tell his story to the world. His courageous messages, told with humour, made him an international celebrity. Eventually, Canada offered Al Kontar refuge in 2018 and he settled in Vancouver via Whistler. His memoir Man at the Airport tells of his harrowing journey.

Man at the Airport: How Social Media Saved My Life ? One Syrian?s Story by Hassan Al Kontar (Tidewater Press $23.95)

Trapped without travelling documents by war and geopolitics, a man gets stranded in an airport lounge for six months.

It all started when Hassan Al Kontar left his home country, Syria, for well-paying work in the United Arab Emirates in 2006. When the Syrian civil war broke out five years later, he did not want to be part of it.

?I did not exist in this life to kill anyone, no matter what,? he says in his memoir Man at the Airport: How Social Media Saved My Life ?One Syrian?s Story, due out this June. ?If I could not stop it, I will not be part of it. As simple as that, I thought at the time.?

It meant Al Kontar could not renew his passport, leading to problems obtaining work legally in the UAE. The decision to be a conscientious objector came with dire consequences, which Al Kontar acknowledges. ?I had surrendered myself to the desert sands and opened the gates of hell for years to come.?

Without regular work, he lived homeless for several years, which included living in his car for long periods. ?So I know how hell smells and what it feels like?it?s a closed car on a summer night in Abu Dhabi with a human being inside it.?

Eventually, Al Kontar is arrested in 2016 and kept in jail on trumped up charges. Here, his hope begins to fade. ?I was no longer the young guy who wanted to travel the world and meet people, could no longer pretend I was the professional in a nice suit, meeting customers, with big dreams and a bright future. I was a criminal in handcuffs.?

After many months and several jails, Al Kontar manages to get some of the charges dropped and travels to Malaysia believing he can get legal status in that country. But upon arriving there, he is denied entry. Next, he tries to gain access to, first Ecuador and then Cambodia. No success. Sent back to Kuala Lumpur International Airport, the authorities keep his passport and he is trapped in the arrivals zone with no official papers.

Not one to give up, Al Kontar still has his cell phone. He concocts a plan to use social media to attract world-wide attention to his plight and get refuge in another country while managing to survive in the airport (a feat unto itself).

On March 11, 2018, Al Kontar tweets for the first time:
?What does it mean to be a Syrian? My name is Hassan and this is my story. I am from Syria. I just want to explain to people what it means to be Syrian. To be lonely, weak, unwanted, rejected. No one is accepting us.?

At first, there are few Twitter followers. But soon, his tweets gain momentum and go viral. BBC TV does a news feature on him. The Washington Post and The Guardian newspapers pick up his story as do other media.

A vlogger, Nuseir (Nas) Yassin, with 33 million followers, who travels the world making videos, discovers Al Kontar. ?I read this crazy story of a man living in an airport for six months and facing arrest in his own country because he refused to participate in a war,? writes Yassin in the introduction to Man at the Airport. ?I thought to myself, ?Wow, I have to make a video about him.??