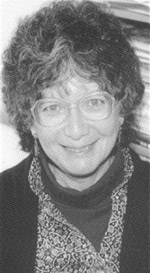 
Born in New York City on September 11, 1940, Sue Ann Alderson attended University of California (Berkeley) and moved to Vancouver in 1967 to teach at SFU, then taught at Capilano College. In 1980, she was the initiator and sole instructor for UBC's Writing for Children program where she was influential in encouraging Shirley Sterling to write her award-winning first book, My Name is Seepeetza (1992). Other students have also credited her as a mentor. She is most widely-known for her successful 'Bonnie McSmithers' series of kids' books. Her Ida and the Wool Smugglers is about sheep-rustling on Saltspring Island. The sequel, A Ride for Martha, is illustrated by Ann Blades and depicts a multicultural Saltspring Island at the turn of the century. Her poetry for adults has appeared in The Stinging Fly, The New Quarterly, The Antigonish Review, West Coast Review and New West Writing. Alderson's book about the Camosun Bog, The Eco-Diary of Kiran Singer (Tradewind) has been awarded an ASPCA Henry Bergh Children's Book Award for Best Young Adult Book (presented at the American Library Association's annual conference in Anaheim, California in June, 2008). Each year the American Society for the Prevention of Cruelty to Animals recognizes books that feature an exemplary handling of subject matter pertaining to animals and the environment.

She lives in the Dunbar area of Vancouver where she has become increasingly active as an abstract painter.


Twelve poems evoke the world of snakes, bats, beavers and Canada geese in Pond Seasons (Groundwood $15.95). Sue Ann Alderson, who wrote A Ride for Martha, celebrates the year of the natural world where butterflies announce the arrival of spring and burrowing turtles bid winter good night. Each poem is highlighted by the gentle watercolours of Ann Blades whose illustrations have twice received the Governor-General's Award.


PRESCHOOLERS WHO GREW UP IN THE late 70s and early 80s with the antics of Bonnie McSmithers singing in their ears will be the perfect age to enjoy Sue Ann Alderson's newest novel for young teens, Chapter One (General $4.95). Chapter One is about Beth, who struggles to balance the desire to be part of a group of high school friends with the need to develop her own identity. Alderson seamlessly weaves several social issues into the plot: aging, abuse, prejudice against teens, coping with separation. : Beth's open relationship with her mother and her imaginative and thoughtful caring for a grandmother who seldom recognizes her put the finishing touches on a novel filled with sensitive, playful and bright characters. The teens in this novel are refreshingly quick-witted. Their dialogue and actions ring true: "The gang linked arms Beth made sure she was next to Chris and stretched five across the side walk. People moved aside to let them pass. 'We must look tough,' giggled Trish. 'Whadaya mean, look tough? We are tough, the toughest, roughest, westside airheads the world has ever seen.'" "'Speak for yourself,' laughed Beth.'I'm very deep... You earthlings may be airheads,' she went on, 'but some of us understand the intense preoccupation of the divergent levels of society, like, the surreal relationship between art and reality.'"-by Allison Haupt

Maybe You Had to Be There, By Duncan (Polestar $6.95)
Review


Sue Ann Alderson's Maybe You Had to Be There, By Duncan (Polestar $6.95) is a highly original story, featuring zany characters, an outrageous plot and off the-wall humour. It's the story of 12year-old Duncan on a picaresque journey and mock-epic quest. Other characters are Duncan's inventor-dentist father, his mad-about-chairs mother and his new friend Magnolia (whose parents are card-carrying members of S.A.M: the Society of Amateur Medievalists). Duncan must restore the world order upset by his father's faulty holograph machine, protecting the rare St. Anthony's tooth from bullies and thieves in the process. He stumbles into re-enactments of the Battle of Hastings, runaway buses, war games and a host of parodied types and characters. The narrative is presented in the first person as a confessional documenta novel-writing assignment for Duncan's English teacher. It is Duncan's appealingly thoughtful, personal voice that moves this funny, light satire into a credible and moral dimension as he observes violence in its many guises and discovers there is more than one way to be a modern day knight.
-by Judith Saltman