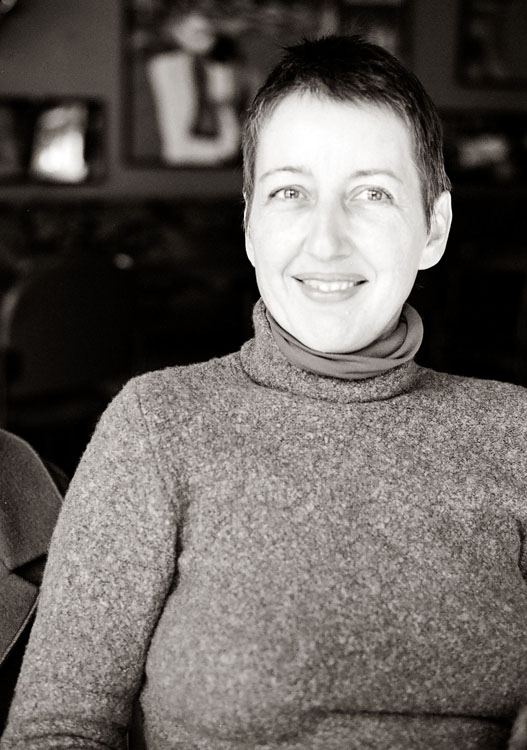 
Born in Portland, Oregon, in April of 1968, Joëlle Anthony immigrated to Canada in 2007 with her partner, Victor Anthony, a musician and songwriter, and they now live on Gabriola Island where, she states "their only plan is to avoid real jobs, write and play guitar in front of the wood stove, and live happily ever after."

According to the author's website, in Restoring Harmony, "the year is 2041, and for sixteen-year-old Molly McClure, her life now is pretty much the same as it's always been. She was only six when The Collapse of '31 happened, ending life as the world's population had known it. For grown-ups everywhere, the changes in their daily routines since The Collapse are a constant source of anxiety and worry. Not to mention bitterness at what they feel they've been cheated out of; abundant food and goods, ease of travel and communication, and financial security. In Molly's opinion, adults spend way too much time talking about the good old days. Sporadic electricity, bicycles, horses, solar powered tractors, sewing, cooking and farm work are all Molly's ever really known, so she doesn't waste a lot of energy worrying about what things used to be like. Life after The Collapse is just normal for her. At least until she finds herself forced to leave the comfort of her home and small island in British Columbia to travel down to Oregon. What starts out as a quick trip to the United States to convince her grandfather to come back to Canada and be the island's doctor, turns into a rescue mission, a test of Molly's strengths, ingenuity, and sheer determination. She faces an unknown world where people are hungry, desperate, and sometimes even ruthless. But she also meets many helpful people, makes new friends, and is tested in ways she couldn't have imagined. Will a farm girl like Molly survive in this upturned world? Will she be able to return with her grandpa in time for him to help her ailing mother? And just how much will she have to compromise to succeed in getting back to British Columbia with her grandparents?"

In her follow-up young adult novel, The Right & The Real, seventeen-year-old Jamie must find a way to survive on her own after refusing to join a cult.

"Jamie should have known something was off about the church of the Right and the Real from the start, especially when the Teacher claimed he wasn't just an ordinary spiritual leader, but Jesus Christ, himself. But she was too taken by Josh, the eldest son of one of the church's disciples, and his all-American good looks. Josh is the most popular boy at school too, and the first boy outside the drama geeks to give Jamie a second look. But getting her Dad involved in a cult was not part of the plan when she started dating Josh. Neither was her dad's marriage to the fanatic Mira, or getting kicked out, or seeing Josh in secret because the church has deemed her persona non grata. Jamie's life has completely fallen apart. Finding her way back won't be easy, but when her Dad gets himself into serious trouble, will Jamie be ready to rescue him, and maybe even forgive him?"

The Right & the Real was named as one of Bank Street's 2013 Best Books of the Year.