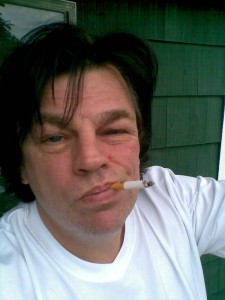 
Born on August 15, 1956, John Armstrong (aka Buck Cherry) grew up in White Rock. Dropping out of high school, he joined Vancouver's emerging punk scene. With room-mate Art Bergmann he formed the Modernettes and later the Los Popularos. A compilation of Modernettes recordings was issued in 2005 by Sudden Death Records, and a reconstituted Modernettes toured Europe and Japan in 2007. Armstrong received nominations for a Canadian Academy of Recording Arts and Sciences award and for a West Coast Music Award.

Having licensed the name Buck Cherry to an American band, the "punk packrat" Armstrong sold his extensive collection of punk memorabilia (flyers, set lists, gig posters, photographs, magazine articles, newspaper clippings, backstage passes and handwritten lyric sheets) to Simon Fraser University in 2008, as arranged by Special Collections archivist Eric Swanick. "I started with a plastic Safeway bag," he told the Globe & Mail's Tom Hawthorn, "Then it was two bags. Then three. Then a box. The box turned into a suitcase bought at Value Village. I just hung onto stuff and it grew and grew and grew." Eventually he purchased a wardrobe from a second-hand store to hold his collection. Swanick bought everything, including the wardrobe. According to Hawthorn's article in the Globe & Mail, it was a case of good riddance. "I hung onto all this stuff," Armstrong said. "I did my duty. I'm sick of having it around."

Armstrong is the author of Guilty Of Everything (New Star, 2001), an autobiographical account of John Armstrong's life as Buck Cherry in Vancouver's old-school punk scene. In 2007, publicity material for his second book Wages (New Star, 2007) stated: "Whether he's writing about the Bobbsey Twins, a pair of strippers who really love their vegetables, the Golden Road personal fulfillment seminar, where you learn that you choose your own cancer, or the literal bowels of hometown paper the Picayune-Standard, Armstrong simultaneously excoriates and delights... He is co-owner of Paramount Recorders, a Downtown Eastside recording studio, where he is finishing his first album of new material in 23 years. He currently lives in East Vancouver's Skid Row with a Rotweiller named BoBo. In his spare time he drinks."

A cat might have nine lives; but John Armstrong has had nine dogs--and counting. John Armstrong's A Series of Dogs recalls the first nine canines to adopt him as a friend, regarding each animal as a fully realized character. It's described as "the sort of book that will make your dog whimper and lick your face to make sure you're okay because you're doubled over on the floor laughing so hard." The former bandleader of The Modernettes recalls his first dog, Ruff, followed by a cocker spaniel named Kiltie, Spooky, Chopper, Rip, a $5,000 Rottweiler named Mugsy, Sluggo, Bobo and Seamus. Several cats make cameo appearances in the memoir.

Review of the author's work by BC Studies:
Guilty of Everything

Articles: 2 Articles for this author
Guilty of Everything (New Star $20)
Info


The catalogue blurb for John Armstrong's punk rock memoir,
Guilty of Everything (New Star $20) is so good, the guy must have written it himself. "Born and raised in White Rock, B.C., John Armstrong (aka 'Buck Cherry') fell in with a bad crowd early and found himself living with Art Bergmann and working at a 7-Eleven. It was during this time that he formed his first band, the Shits, later to be renamed the Monitors..."; A Vancouver Sun writer since 1986, Armstrong offers just what the world is really waiting for, punk bands' stories "from a Buck's-eye-view"; and a "non-stop carnival of debauchery."; 0-921586-86-8


Fronting a punk band in Vancouver in the '80s demanded dedication far beyond monetizing your Tumblr and keeping your Bandcamp up to date. In between gigs with the Modernettes, John Armstrong became a menial-labour mercenary, selling his surplus value to any scoundrel with a paycheque, from slaughterers of bunnies to producers of newspapers, just so he could afford strings on his guitar and beer in his gullet.

The result, aside from alienation and hangovers and great punk songs, was two brilliant and hilarious memoirs: Guilty of Everything (2001), about the fun, and Wages (2007), about the work.

In preparing an ebook version of Wages we discovered an entire section of the manuscript, about working at "Ready Home & Garden," that hadn't made it into the print book. Against the advice of our legal team, we decided to publish the missing chapter.