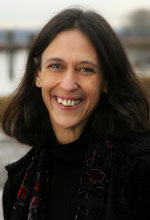 
Focussed on the "brown feminine," A Night for the Lady (Ronsdale, 2013) is a rich tapestry of poems inspired by Joanne Arnott's personal relations with other writers and her wide-reaching influences from foreign literature. Both playful and mournful, Arnott celebrates the resiliency of the human spirit and her own hard-won dignity as a Métis mother.

"The title for this collection I found on a stroll down Broadway, in Vancouver: 'A Night for the Lady' was the name of a benefit gathering honouring Aung San Suu Kyi... Somehow the balance of honouring and political activity spoke to me strongly, evocative of both the Divine Lady (or Ladies) of my Roman Catholic youth, and the regional ways of speaking that I am at home in, a more casual and affectionate use of the term."

Born "on the banks of the Assiniboine River," in Winnipeg, Manitoba, in 1960, Joanne Arnott is a self-described Métis/mixed-blood poet and arts activist who facilitates Unlearning Racism workshops and received the Mayor's Award for Literary Arts in Vancouver in 2017. She studied at the University of Windsor, then moved to British Columbia in 1982. Much of her writing concerns family relations, such as "Like an Indian: Struggling with Ogres," a pastiche of five prose poems to conclude My Grass Cradle (1992). Her first book of poetry, Wiles of Girlhood (1991), was written "for all the young women" and won the Gerald Lampert Award. Her other books include a children's book on natural childbirth, Ma MacDonald (1993), illustrated by Mary Anne Barkhouse.

In her collection Breasting the Waves, she writes: "My Family / some of us are sitting around the table, getting on for a change, peaceable, friendly. My sister, who always thought that my father was beautiful, tells him so. He hears it. She goes on, strokes his arm lightly and says, your skin is beautiful. Like an Indian. He jumps up, afternoon shattered by a girl's words saying the unsayable words, he storms from the room, a real electrical storm crackling and swirling through the rooms of our small house. Power of repression, power of lifetime and generations of denial, everything coming unhinged on an afternoon where he'd dared to relax for a moment with his children. Well you can't trust children. Never relax with them. They are crazy, and you never know what they might say...

"I am not the only girl or woman of my generation / in my family learning to find safety in the truth. We struggle to unsilence ourselves, and to stop silencing each other: Not easy. We write letters, poetry, songs, and tell each other stories, from a distance, over time. / Am I an Indian? Like an Indian? Or, as a dream-man told me with a loud guffaw, "Better a little bit Indian than not Indian at all!" I am a woman who was a girl, Native and European, a parent who was a child who struggles with ogres. / Now and then. Now and again."

Other early titles included On Writing & Healing (1995), a selection of candid personal essays on writing, healing and motherhood; and Steepy Mountain: Love Poetry (2004).

As a mother to five sons and one daughter, Joanne Arnott lives in Richmond where she wrote her reflective volume, Mother Time: Poems New and Selected (Ronsdale $14.95), covering her twenty years of maternity. She has contributed with 23 other women to an anthology, My Wedding Dress: True-life Tales of Lace, Laughter, Tears and Tulle (Vintage 2007), recalling the highs and lows of getting hitched. Arnott describes how her Métis friends Flo Robertson and poet Greg Scofield encouraged her to incorporate a marriage blanket ceremony into her wedding at Strathcona Community Gardens. "This blanket covers you," she was told, "in the way that your marriage will cover you. Treat it with respect."

Joanne Arnott is a founding member of the Aboriginal Writers Collective West Coast and a past volunteer on The Writers Union of Canada's National Council and The Writers Trust Authors' Committee. She has also served as judge or jurist on a variety of literary prizes and awards, including Manitoba Book Awards, BC Book Prizes (Poetry), SaskArt (short non-fiction), Governor General's Award (Poetry), and Babishai Niwe Poetry Prize (Uganda). Her essays and poetry have appeared in more than 25 anthologies, including Indigenous Poetics, Uncommon Wealth, Native Poetry in Canada, Native Literature in English, How the Light Gets In (Ireland), Double Lives, Without Reservation, Manitowapow, 111 West Coast Literary Portraits, Alive at the Centre (PPP), and Force Field.

In 2016 she became Poetry Editor for EVENT Magazine.


Vancouver-based Métis poet Joanne Arnott Zenthoefer is bringing M) and Stories of the Road Allowance People (1995), to coordinate sessions for her Mothers Writing Workshop Advisory Group, in May of 2007, locations to be announced. This workshop will gather diverse aboriginal mothers and grandmothers to focus their writing about pregnancy, childbirth, and mothering. For more info, contact Joanne.Arnott+birth.stories@gmail.com