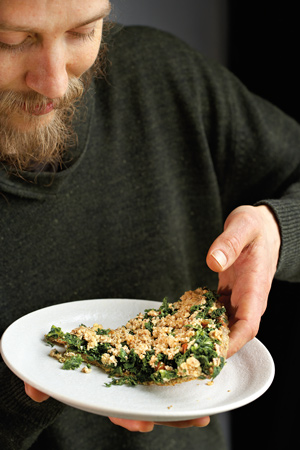 Arsenal Pulp Press has published Aaron Ash's raw vegan cookbook, Gorilla Food.
If you ask people to try a "raw vegan fruit salad";, they might answer that they don't eat raw vegan food. But offer them a "fruit salad";, and they'll tell you they love the stuff.

Aaron Ash shared this hypothetical situation with the Georgia Straight during an interview at Gorilla Food (101-436 Richards Street), the organic, raw vegan restaurant that he owns in downtown Vancouver.

"That's sort of why I play it down and treat it like food,"; Ash said, sitting at a table in the back of the café.

It's an approach the 36-year-old former personal chef for Mike D of the Beastie Boys brings to his first cookbook, Gorilla Food, published by Vancouver's Arsenal Pulp Press. The 247-page book's release this month comes as Ash prepares to open a second Gorilla Food location, in the Downtown Eastside, and eyes further restaurant expansion.

In the book's introduction, Ash lays out his thoughts on organic, vegan, raw, and living foods, and notes the influence of the Rastafari movement on his cooking. He also runs through a list of tools that are useful for raw foodists, such as a dehydrator and a mandoline.

It's worth noting that a number of the recipes in the book are labelled "pre-soak";, indicating that some ingredients, such as arame, Brazil nuts, and cashews, need to be immersed in water for anywhere from 30 minutes to overnight. Ash noted he hopes Gorilla Food will help more people appreciate "real food";.

"I feel like they'll come to realize how much time actually goes into making food-that's one thing-and then also, on other recipes and other aspects, how little time things take,"; Ash said. "Maybe there's an idea that 'Oh, it's so hard to eat raw foods,' but it's actually not so hard once you get in the rhythm and learn how to use certain tools.";

Ash, who grew up in Saskatchewan, counts the Oh My Gado Gado Nice Bowl, Peanut Selectah Pizza, and Jungle Peanut Butter Cups among his favourite dishes in the book. He considered the health benefits and local availability of ingredients when selecting the recipes, which he said represent "international cuisine";.

"If we're going eat, we might as well eat the most optimal things for ourselves and eat the most densely nutritious, most full of life-force food,"; Ash said. "That's the aspect of raw foods-the life-force that it brings to us. We're connecting directly with the Earth and its electrical force, I think, through not diminishing that. Maybe that's a woo-woo answer. So maybe I'd say also, if we want to have an optimal life, in all areas of life we should make the optimal choices for ourselves. When it comes to nutrition, I think that raw vegan foods are the most optimal choice.";

After running a "guerilla"; catering operation from his home, Ash started Gorilla Food as a downtown takeout window in 2005 before moving the business to its current basement space in 2007. He hopes to open his second Gorilla Food location at 477 Powell Street, across from Oppenheimer Park, in January or February 2013. At twice the size of the Richards Street café, the new restaurant will serve as the operation's central kitchen and sell more packaged foods.

But the expansion probably won't stop there. Ash is eyeing a potential space in New Westminster. He also envisions "little"; Gorilla Food cafés sprouting up in Kitsilano, on Commercial Drive, on Main Street, at the University of British Columbia, in North Vancouver, in South Surrey or White Rock-and even in Byron Bay, a surfing town in Australia.

"The idea is to make vegan, organic, and raw foods accessible for people,"; he said, noting his "casual"; restaurant chain will only come to fruition if it can be done sustainably.

Gorilla Food isn't Ash's first publishing effort. In 2010, he put out Feelin' Fun With Raw Foods, a DVD and recipe booklet. Now he's already thinking about his next cookbook, which, he mused, will definitely be vegan but not necessarily purely raw.